By Alexandra Lozano, Christine Moitoso on March 11, 2005 in News 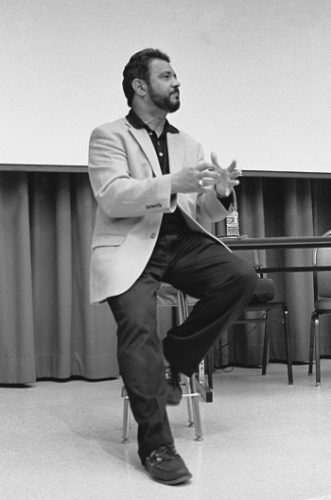 Expressing his fear of being arrested at night by the government, Sadullah Khan compared his experience in the United States to living in South Africa during the fall of Apartheid. He went on to talk about the effects on the Muslim community after 9/11 at Saturday’s Peace and Education Conference. The conference was organized by Assistant Professor of Education Lisa Porter. / photo by Gloria Diaz

“The purpose of this conference was to explore as educators how we can begin connecting peace with issues of justice during these times of war,” said Lisa Porter, assistant professor of education, who was in charge of the conference.

Events at the conference included hands-on training sessions on peace education curriculum and mediation. Also, there was interactive dialogue on how teachers are dealing with topics of war and guest speakers, such as Sadullah Khan, who spoke about being Muslim post 9/11.

When Khan came to the United States from South Africa, he went to the U.S Immigration and Naturalization Service to become a citizen.

He claimed that he was South African but INS insisted that he was middle-eastern. Not knowing which ethnicity he belonged to, he decided to check the box “other.” After becoming a citizen of the United States, Khan never saw himself differently from any other Americans, but after 9/11 Khan felt like a stranger.

Khan said people saw him as a potential terrorist who was guilty by association.

“Intense scrutiny goes beyond ordinary caution, it leads to interrogation,” Khan said. “I was finger printed and photographed when I would go to the airport just so others would feel safe. I don’t sleep at night.”

Khan said that Muslims are now shying away from calling themselves Muslim and are worried about their children’s future.

He also said that one in every four Americans have a negative image of Muslims.

“We need to begin recognizing our common humanity and if we aren’t part of the solution then we are part of the problem,” Khan said. “All change begins with us.”

Khan’s message proved to be very effective because it touched the minds and hearts of those like Roxanna Kharaud, a ULV first year graduate.

“He was very inspirational and I got a lot of background into the injustices that Muslims suffer in society today,” Kharaud said.

After Khan’s speech, the day continued with a series of mini workshops that led to a presentation: “Teaching Peace in Times of War.”

The peace conference concluded with “Teaching Peace In a Time of War,” a documentary about teaching peer mediation at Vasa Pelagic School in Belgrade, Serbia.

The film displayed images of the war-stricken country and the war’s effect on the children who live there. Many who watched the film were moved.

“It’s very inspirational,” sophomore Jennifer Chavez, a business major said. “It opens my view to a different world. In our world, we’re very sheltered and to be able to see what other children have to go through is very rough. I just enjoyed the experience.”

“It was wonderful, absolutely wonderful,” said Kathryn Barnette, a teacher from Murrieta School District. “I really enjoyed it.”

“The two women that made the movie are exceptional,” said Kathryn Barnette, a teacher from Murrieta School District.

Van Gurp expanded her interest for peace education after her son was killed by a violent incident.

She believes that in the most challenging of circumstances, teachers and students can work together to make significant progress.

Although the children portrayed in the film were 12 years old, most of the audience members had the impression that they were older. Even director MacInnes was surprised by the maturity of the children in the film.

“Sometimes I felt like I was talking to a peer,” MacInnnes said.

Peace is not just in terms of dropping bombs, said one audience member. He compared “Teaching Peace” to the American movie, “Thirteen” and to the hardships that both countries face in the search for peace.

“Thank you for recognizing that change begins by stepping outside our comfort zones,” Porter said.

“Teaching Peace In a Time of War” was the third film in a series about peace.

Guitarist Jamie Barnette opened for the film by singing songs about equality and peace, including “381 days” a song about Rosa Parks.

About 30 people stayed for the ending of the first peace conference at ULV.

The school of education funded the peace conference.

Happenings
Remember a legacy, not a mistake