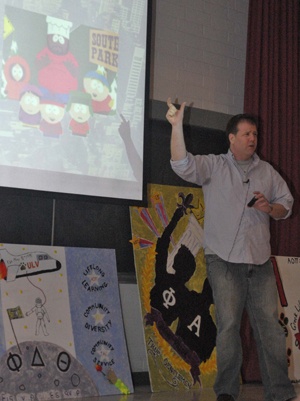 As part of Greek Week, C. L. Lindsay III, founder of the Coalition for Students and Academic Rights, spoke of the perils of using the Internet for illegal downloading, posting photographs and plagiarism. His organization helps protects student’s rights by offering free legal service. / photo by Sher Porter

C.L. Lindsay, a lawyer from Philadelphia and author of “The College Student’s Guide to the Law,” spoke at the University of La Verne about MySpace, Facebook, blogging and the consequences that come along with users sharing too much information about themselves online.

At 10 p.m. on Monday night in La Fetra Auditorium, every Greek organization gathered, not only to hear the results of the Greek Week 2008 awards for the day.

But they also had to tune in to what Lindsay had to say about the legal consequences that come with downloading music, movies and putting out too much information and posting pictures of illegal happenings on the Web.

“Everyone has a MySpace and it can get you into trouble,” said Matt Dominguez, a member of Phi Delta Theta.

The comedic performance that included pictures of action figures performing illegal acts and drinking underage – along with pictures of students of ULV students taken from the Web.

It gave the audience a look at how serious a simple thing, such as posting pictures on a Web site profile, can affect you in a legal way.

“I saw him speak in Portland two years ago and thought he might be a good person to have on campus,” said Chip West, assistant dean of student affairs and director of student life. “So we called him up three weeks ago and here he is.”

Lindsay, along with a professor friend, founded the Coalition for Students Academic Rights.

“We thought most of it was going to be professors calling us, but we got about 180 requests in our first three months, all having to do with students and their day to day problems, most of them about underage drinking and trouble online,” Lindsay said.

This can cost anywhere from $3,500 to $15,000 in just court costs alone, not including any damages that are awarded in the suit.

Lindsay went on to explain that everything online is copyrighted and already belongs to someone.

He tied this thought in with plagiarism and buying “custom” essays online which is popular among students in getting out of doing their work.

Scams can come from these sites because they will charge your credit card more than once and also have your school’s name so that if you don’t pay the charges you can be expelled for plagiarism.

“The papers from these sites blow,” Lindsay said. “You might as well hand a 5-year-old a box of crayons and tell him to write 12 pages on botany. Go!”

The subject that stirred the auditorium the most was the topic about online stalking, online groups, and posting pictures of illegalities online.

Many people have no idea how much information others can get from your own website or profile that you make available to others to see.

Using the example of the Fourth Amendment and a citizen’s right to privacy, Lindsay said that because the University La Verne is a private institution, “You have no expectation of privacy.”

Lindsay also used the example of a student leader getting expelled for joining a Facebook group that advocated violence towards police, even though he wasn’t active in the comments being made.

According to Lindsay, 25 percent to 35 percent of employers and 75 percent of recruiters look at Facebook and MySpace.

Lindsay suggests that when trying to find a job, watch for religious and political opinions as well as email addresses that may give the wrong impression and advises to “assume anything you put online will stay there forever.”

If you have anything offensive on your MySpace or Facebook or another place that you may have your profile, posted, employers can easily access your information with your e-mail.

“The most important thing I would stress is to think of the offline equivalent to what you’re doing online first,” Lindsay said.

Lindsay has spoken at more than 200 colleges over the past year and is a full-time lawyer with his office located in Philadelphia.

His organization’s Web site is www.co-star.org and can be reached through his email at lindsay@co-star.org.

Monica Esparza can be reached at mesparza2@ulv.edu.