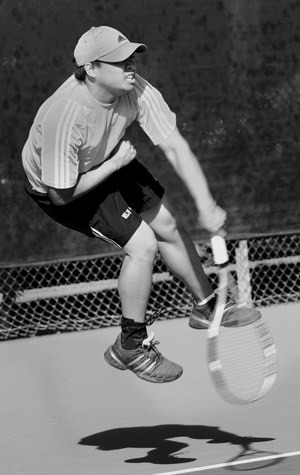 Delivering a serve to opponents from Hope International, Adrian Laygo started the rally. Laygo, along with doubles partner Richard Delgado, scored 3-8 in the doubles Match and 2-6, 0-6 in the singles match. The Leopards lost 6-3 to the Royals on March 6. / photo by Leah Heagy

The inexperienced team tried its best against the Stags, who are 9-3, but the Leopards were defeated Feb. 24, 9-0.

The Stags are the fourth Southern California Intercollegiate Athletic Conference team that they played in the season. They are 4-0 this season in SCIAC play.

“The guys just give me as much as they can give me out there,” said head coach Steve Bergovoy.

Bergovoy said that Claremont-Mudd-Scripps is one of the top four best teams that La Verne will play this season.

Hope International, Redlands and Cal Poly Pomona are the other three.

The Leopards are both a young and inexperienced team, competing against highly ranked teams.

They only have three returning players, and the doubles teams are trying to learn how to play together.

There are only two players on the team that are considered to be be more seasoned, sophomore doubles team Richard Delgado and Adrian Laygo.

“I thought I played really well, but I thought I was overmatched,” senior criminology major Kyle Fournier said. He has had only two years of experience.

Two matches were won by default because junior Joseph Manfre was unavailable to play his matches.

However, Manfre and Fournier were one of the winners in doubles against La Sierra Feb. 23.

Yet the Leopards also lost that game, 6-3.

After a week, the Leopards had to play another tough match against another top team, Hope International University on Mar. 6.

The La Verne men were ahead by 3 games before the match started, due to default.

Only four of the six players of the opponent’s team competed against the Leopards.

All four players who competed were internationally ranked.

Even with the defaults, the Leopards lost 6-3, not winning any of their matches.

The loss was not due to a lack of effort as many players played their best in their matches.

“We don’t have the skills to match up with the other teams, this year,” Bergovoy said.

Unlike La Verne, Hope International has frequently been able to recruit players with scholarship offers to play their institution.

Delgado says that it is easier to have a good team when the school has money to give and is able to pull strings to get top players.

The La Verne men did not let Royals intimidate them in their match.

In some of matches, the Leopards came out strong, leading the match at a few points, but soon lost the lead and the match.

“I think I played competitively, but not at my full potential,” business administration major Delgado said.

The team is now 0-8, having lost every match this year despite having a very tough schedule.

Co-captain Fournier believes that the team is doing the best it can with what it has.

“We got to take each match as it comes,” Fournier said. “We can’t go in expecting to lose or to win.”

Manfre, who only has one year of experience playing competitively, looks forward to each match.

He believes that each game is fun and takes what he learns into other matches.

“This whole thing is a new experience to me,” Manfre said. “Every time I get out there it’s fun.”

Bergovoy holds the same positive attitude that Manfre has.

He appreciates his team, knowing that the players are trying their best and have good sportsmanship.

The team is working hard in practice to play better during its matches.

Although Bergovoy sees improvement in the team, he says that he has realistic goals for the season.

Each match, to him, is a learning experience.

As the team continues to learn this season, he hopes to meet the goal of moving up the ladder in SCIAC.

The Leopards will go on the road to play Biola, who is 1-8 this season.

After losing to the Eagles in the their season opener, La Verne will seek revenge on Biola on March 10 at 9:30 a.m.