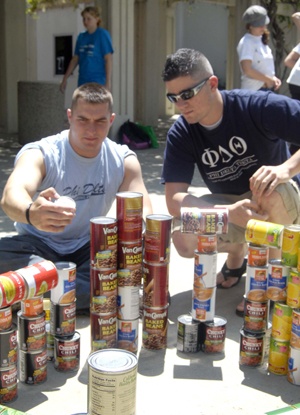 In celebration of Earth Day, the fraternities and sororities on the University of La Verne campus took part in a competition to arrange food cans in the shape of well know artworks for Greek Week points. Ben Paine and James Ridings, members of the Phi Delta Theta, were attempting to recreate Henri Matisse’s “The Dance,” but received sixth place. / photo by Sher Porter

The intersection of Greek Week and Earth Day this year brought “Greek Life: A Unified Masterpiece,” in which contestants competed in a canned food art contest in Sneaky Park on Tuesday.

“We tried to think of a way we could have a canned food drive and combine it with everyone’s creative abilities and art,” Greek Week coordinator Alan Hernandez said.

There were six groups set up in Sneaky Park and each group was given only 300 cans to work with and a picture of what their masterpiece would be.

The sororities had to create a picture and interpret the picture with the cans on the ground, lining them up, on top of each other, side by side or however they thought would represent the picture.

Members of Phi Delta Theta had to make their cans represent a picture of Greek figures dancing in different backgrounds. The piece by Henri Matisse is titled “The Dance.”

They were persistent in organizing their cans by shapes and colors to define the different artistic poses that their figures in the picture portrayed.

They used cans of red beans for the background and green cans of spinach for grass and blue cans for water.

The cans were angled in a certain way to give a special effect look and make the figures come alive through the cans.

“There is nothing better than knowing that the cans will go to charity,” Phi Delta Theta freshman Wil Ortiz said.

Sigma Kappa’s masterpiece was a picture of the famous Michelangelo painting of “The Creation of Adam,” in which they had lined up the larger sized cans in representing the man’s body in the picture.

“It may be interpreted in a whole different way after we are finished,” Sigma Kappa junior Kiran Jethani said. “We hope it works out.

While, SAE members were recreating the colorful Andy Warhol picture of Marilyn Monroe, they hit a bump in the road in deciding whether or not they should use the yellow cans of corn for Monroe’s hair.

Other groups such as Alpha Omicron Pi used their associates as models lying on the ground in a pose.

It was almost like a live art show as members of the sorority lined up the cans exactly like them.

“We tried stacking the cans up but that did not work so we are now trying another plan lining them up,” Alpha Omicron Pi senior Floricel Ramos said.

Earlier in the day Iota Delta was already finishing up their masterpiece.

They were the first group to finish their masterpiece and were pleasantly pleases with the results.

“We started off with colors and luckily we had all the colors of cans we needed to represent,” Iota Delta junior Alé Velasco said.

Many more cans were donated for the event and will go to the Sewing for Life Foundation.

“We are really happy with all of the support from all of the organizations in making this happen,” Hernandez said.

Jennifer Kitzmann can be contacted at jkitzmann@ulv.edu.