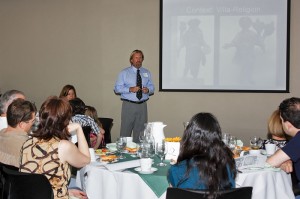 Jonathan Reed, interim dean of the College of Arts and Sciences and professor of religion, lectured on Pompeii culture and the religious views of the Romans on Saturday. Reed’s presentation included a video clip of the HBO show “The Gods.” Following the lecture, guests took a trip to the Los Angeles County Museum of Art to view the exhibition “Pompeii and the Roman Villa: Art and Culture around the Bay of Naples.” / photo by Stephanie Arellanes

We think of Pompeii as nothing more than a Roman site destroyed by Mount Vesuvius and left covered in pumice. When brought to life in museums, these ruins are then looked at through the eyes of an artist. We stray away from archaeological precepts, ignoring all facts of the Pompeian culture and society.

Interim Dean of the College of Art and Sciences, Jonathan Reed, gave a lecture on Saturday in the President’s Dining Room concerning the ancient society, prior to its demise.

Jean Bjerke, vice president of advancement, introduced Reed, speaking of his many accomplishments, including appearances on the History Channel and an excavation trip in Galilee.

“We’re glad to have La Verne’s very own modern-day Indiana Jones with us,” Bjerke said. “He’s been at the University since 1993 and spent his summer in Naples.”

Reed began his presentation, “Pompeii and the Roman Villa: Art and Culture Around the Bay of Naples,” focusing on the major themes of the villa, gender and sex, and religion.

“Is what you’re looking at an ‘objet d’ arte,’ or artifact?” Reed said. “To me, they are artifacts, to you they are objects of art.”

Reed spent a majority of the lecture focusing on the difference between the two, honoring the artifacts to hold more value than artistic appeal.

“I’m trying to look at them to help us understand what they say of people of antiquity,” Reed said.

He moved along quickly, touching base on the Roman villa explaining that they were homes of the wealthy, where one would essentially display his or her riches.

“What you need to understand is that unlike today, where the wealthy live alone, in antiquity, a villa was a microcosm of society in itself. There was a hierarchy,” Reed said.

Reed transitioned from a monetary hierarchy to a sexual one.

“This is what we though of the Greeks: they were cool with their bodies – nudity and eroticism. But really, it’s only our impression because it’s what we see in museums,” Reed said.

“Sexuality in antiquity is not what it seems. There are many brothels, bath houses and graffiti,” Reed said.

Ancient eroticism is depicted to be pure and wholesome, when in actuality, it was a lot cruder than portrayed.

The phallus served as a symbol of protection, where emblems were placed in front of people’s homes. “Here end dwells happiness,” was usually carved next to the object.

Priapus, guard of the garden, tied in greatly to the Roman significance of the phallus. His role as keeper was to protect those through the sodomy of others.

This in turn, stressed the strength of the male through aggression.

He then made a shift from eroticism to religion, holding that the Romans were religious peoples, leaving room for reverence in their daily lives.

“It’s interesting to listen to the context of the people of that day. Nowadays we think of them as art,” said Maria Rodriguez, an alumna from the University.

Reed’s presentation was followed by a trip to the Los Angeles County Museum of Art, where a majority of the attendants proceeded.

Overdrafts no longer a nightmare
Happenings