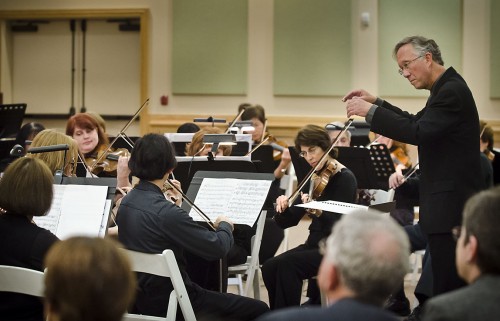 The Los Angeles Doctors Symphony Orchestra performed to a full house in The Meeting House at Hillcrest on Sunday.

This is the second time that Hillcrest invited the LADSO to perform for them. This year Samuel Fischer was a guest violinist for the last song that they played.

The LADSO was founded in 1953 and is one of the oldest community orchestras in the United States.

The symphony’s origin is in the health professions.

Many people who live at Hillcrest as well as a few outside guests attended the performance.

As the guests took their seats, the performers warmed-up and tuned their instruments.

The orchestra was set up in an oval shape facing the audience, making it perfect for an intimate setting.

Ivan Shulman used an example of traveling to describe the music that was going to be played.

He said the music would start in Scotland, then move to Germany and end in Austria.

Shulman became music director of the LADSO in 1990. He is also on the music faculty of Cal State Long Beach.

The first piece performed was “Hebrides Over­ture, Op. 26” by Mendelssohn.

This piece started off in a minor key with a nice slow tempo. It was played very softly but echoed beautifully in the room.

There were many moments of loud suspense. It finished with a staccato sound and softened with a flute.

The next piece was “Siegfried Idyll” by Wagner. This song started off with a sweet melody but was also in a minor key. It was very slow and then began to have a louder, more prominent sound.

The same melody kept repeating throughout the song but seemed to get darker every time.

During this performance, the musicians seemed to stay very calm. It became very loud and more harmonious toward the end.

The next song was titled “Romanian Folk Dances” by Bartok. This piece started upbeat and had a nice moderate tempo. The piece ended loud but still very consonant.

“The first two pieces were slow and then the Bartok was more energetic,” guest Laura Klure said. “(Romanian Folk Dances) feels like something you should dance to.”

The last piece featured the guest violinist Fischer and was “Violin Concerto in D Major, Op. 61” by Beethoven. It started off in major key and had a moderate to fast tempo.

This song consisted of Fischer playing and then the orchestra playing the same notes after him.

The violinists often used a form of playing called pizzicato during the song, which means to pluck the strings of the violin instead of playing with the bow.

Toward the end of the piece, the melody from the beginning returned.

The orchestra quieted while Fischer played the melody in higher notes and the piece ended with a bang.

“I got my taste today,” guest Suzanne Valentine said. “(The music) filled my need.”