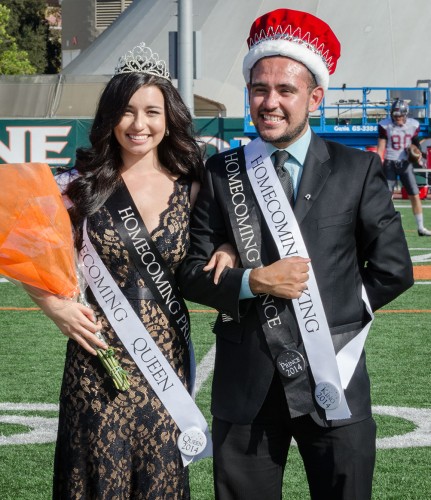 The Homecoming court stood in front of five dance team members, who sat in cardboard cut-out televisions. The two static-free televisions that were working revealed Jose Serra as Homecoming king and Evelyn Bobbitt as queen.

La Verne’s All That ‘90s themed homecoming week closed after a successful street fair and the announcement of Homecoming king and queen at halftime during the football game on Saturday.

Campus clubs participated in the fair with 1990s themed booths and floats reflecting famous television shows, and were evaluated for monetary prizes based on creativity.

The dance team kicked off the halftime show with an old school hip-hop mash-up of the theme song to “The Fresh Prince of Bel Air” and a mix of Nicki Minaj’s “Anaconda.”

In a formal style, the five princesses including Caiti Helsper, Daisy Betancourt, Cassie Holloway, Stephanie Mendoza and Bobbitt walked in pairs with princes Miguel Garcia, Serra, Cole Wagner, Steven Santana and Julian Mininsohn across the field as their involvements on campus were announced on the loudspeaker.

The crowd roared in triumph at the announcement of the winners, Serra, representing Sigma Alpha Epsilon, and Bobbitt, representing Iota Delta.

“I just feel so grateful and honored to win, I really didn’t expect this,” senior biology major and Homecoming queen, Bobbitt said.

“Everyone has their own La Verne story, I have mine. It’s my senior year, I’m glad (homecoming’s) a part of it, and I just encourage everyone to find their own niche at La Verne,” senior public relations major, Serra said.

Winners of best booth and float were also announced. Sigma Kappa won first place and a cash prize of $400 for its “Bill Nye” booth, Sarah and Michael Abraham Campus Center Club won second place and $300 for “The Simpsons” and Sigma Alpha Epsilon came in third place with $200 for “The Lion King.”

“We were so happy when we found out we placed. We spent a lot of time working on the booth, and wanted it to be memorable since it was our first time participating in Homecoming as a club,” said Jennifer Wheeler, president of SMACC and junior speech communications major.

“SMACC club is all about the community of ULV. We want the Campus Center to be recognized as a place where people can gather and socialize,” she said.

“We chose ‘The Magic School Bus’ based on our philanthropy which is School and College Readiness, where we raise funds for kids in need in student programs,” Daisy Betancourt, senior business major and president of Phi Sigma Sigma said.

“We wanted to represent the ‘90s and represent our organization and what we stand for,” she said.

“Everyone has a representative of the student body (at Homecoming) who is involved and helps others and is a good face for the school,” Bobbitt said. “I try to give back to my community all the time and try to make other people feel special so I hope that (next years’s queen) has done the same thing for this school.” 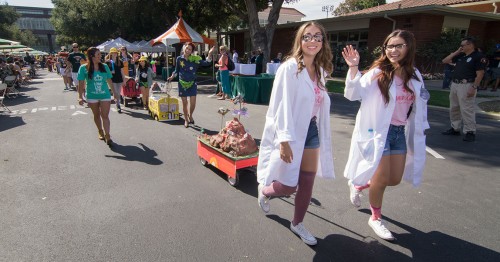 Sigma Kappa sisters Melissa Procopio and Anais Hidalgo parade through the center of campus with their science experiment float inspired by Bill Nye the Science Guy. Their entry earned second place in the float competition. Alumni, University officials and students also marched in the parade, which began at the Hanawalt House and ended at the corner of C and 3rd streets. / photo by Daniel Torres 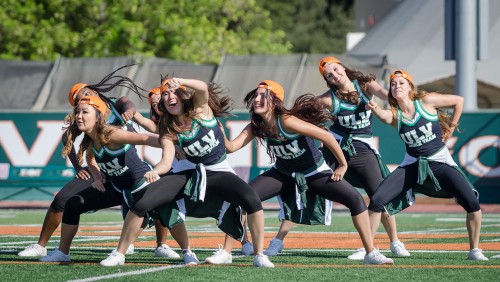 The La Verne Dance Team performs during half time at the Homecoming football game against Redlands. The group – including Ashley Hernandez, Diana Ibarria, Miranda Ramirez, Sarah Oishi, Hayley Kurisu, Shantall Segura, and Jasmine Marchbanks – also assisted with the announcement of Homecoming king and queen. The Dance Team’s mission is to promote school spirit through performances at sporting events and other campus events. They dancers perform a variety of genres of dance but their two main styles are jazz and hip-hop. / photo by Emily Bieker 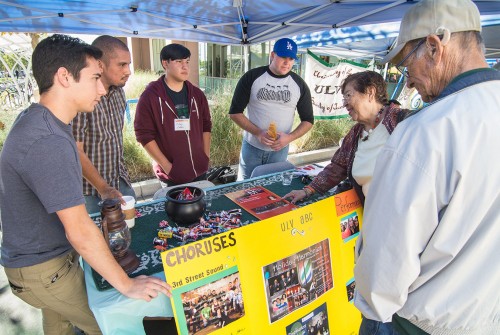 Skipworth steps down
No Homecoming magic for Leopards