By Emily Bieker, Hal Hargrave on October 31, 2014 in Football, Sports 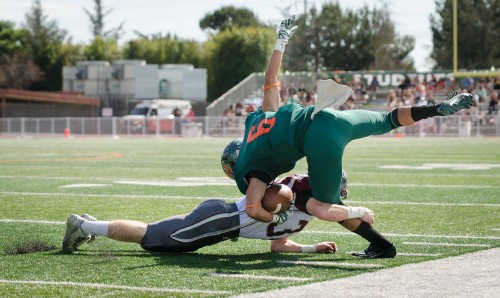 La Verne senior wide receiver Andres Fernandez is tackled by Redlands sophomore defensive back Aaron Mandell Saturday at the Homecoming Game. The Bulldogs took a bite out of the Leopards’ pride as the Leopards fell, 64-28, at Ortmayer Stadium./ photo by Emily Bieker

What the Leopards hoped would be a magical day during Homecoming weekend turned out to be much less than magical for the La Verne football team, as it suffered a tough loss to the Redlands Bulldogs, 64-28, Saturday at Ortmayer Stadium.

The loss puts the Leopards at 1-4 overall for the season and 0-4 in Southern California Inter­collegiate Athletic Conference play.

“We started off hot but both mistakes on turnovers hurt us later in the game,” head coach Christopher Krich said.

“We need guys on our bench to step up and fill the void because we definitely have the depth we just need the confidence to do it.” he said.

The Leopards suffered 19 straight seasons of losing to Redlands, going in to the game, and started off the first quarter with a 14-0 La Verne lead.

Livingston went five-for-five for 32-yards on the first drive, which resulted in a touchdown by junior running back Travis Sparks-Jackson.

He ended the game with 55 yards rushing and a touchdown.

The Leopards stopped Redlands on the Bulldogs first possession and Livingston was perfect again on the second drive and completed passes to three different receivers.

The drive was capped off by a 30-yard strike to senior wide receiver Andres Fernandez and put the Leopards up, 14-0, with 5:58 left in the first quarter.

Fernandez ended the game with four catches for 68-yards and a touchdown.

Livingston ended with 121 yards, with a touchdown and an interception, before going down with a hurt shoulder.

The Bulldogs answered back quickly with a strong kickoff return for 62-yards by sophomore running back Devon Appleton.

This gave great field position to the Bulldogs to start the drive.

The drive resulted in a field goal, but that is all it took for Redlands.

The Bulldogs were able push momentum their way with a 43 unanswered points run.

The Leopards’ pass defense came into the game ranked last in the nation in passing yards per game, allowing over 350 yards a game.

The team was able to hold the Bulldogs to 237 yards passing for the game.

The Bulldogs scored three times and recorded 33 more points in the last seven minutes of the second quarter, to take the hopes away La Verne, to go up 43-17 at halftime.

Junior quarterback Justin Gomez came into the game and hoped to cut the deficit and bring back the La Verne momentum.

“I was both physically and mentally prepared to go into the game and take on any task that I was asked to do,” Gomez said. “My preparation during practice has helped me to step it up when I need to.”

Gomez was able to put the first point up on the board for the Leopards.

He connected with sophomore tight end Christopher Gura for a 49-yard pass for a touchdown in the first drive of the second half.

This was Gura’s first touchdown reception of his career. The Bulldogs were still in the lead, 43-21.

With two rushing touchdowns early in the fourth quarter, the Bulldogs extended their lead, 57-21.

Gomez did not give up and answered back and was able to connect on a 4-yard pass to junior wide receiver Alex Villalobos, with 4:49 left in the fourth quarter.

Villalobos finished the game with 10 catches for 56-yards and a touchdown on the game.

The Bulldogs put the game out of reach with a 15-yard run with 1:13 left in the fourth quarter.

This gave Redlands a 64-28 lead, that they held on to keep as the final score.

“We need to get everyone together and not see it as a defensive line or defensive backs or linebackers individually,”Arguello said. “We need to see our defense as a whole and all be accountable and all coming together as one. If one fails or messes up then we all do too and we need to put it together for all four quarters and not point fingers.”

Senior linebacker Christian Lozon, who leads the team in tackles, finished with four total tackles on the game.

“We have our heads held high and finish on a positive note,” Lozon said. “No matter what the score may be we have to leave it all out on the field each play.”

Gomez finished with 145 passing with two touchdowns and two interceptions.

“I believe that we have the best 11 guys on both offense and defense and the conference and I would not trade any of them,” Gomez said. “We can prove that next week by taking down a top 25 team and showing them how good we can be.”

The Leopards will face No. 25 Chapman at 7 p.m. Saturday at Ernie Chapman Stadium.