By Emily Bieker, Hal Hargrave on September 19, 2014 in Sports, Volleyball 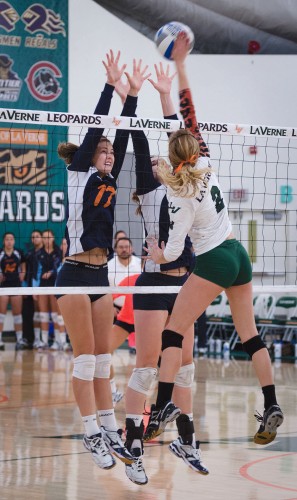 Junior outside hitter Ashlyn Cross spikes the ball against Pomona-Pitzer’s middle blockers in the Southern California Intercollegiate Athletic conference opener Saturday. The Leopards plucked the Sagehens with 3-0 and later took down No. 6 nationally ranked Colorado College. / photo by Emily Bieker

The women’s volleyball team started off Southern California Intercollegiate Athletic Con­ference with a win over the Pomona-Pitzer Sagehens, 3-0, Saturday at Frantz Court.

“I don’t think there was any play that changed the course of the game, but that is what makes this team so great right now,” head coach Jenna Panatier said. “We don’t have any one show horse, we have athletes who come out and help balance it out.”

In set two, with the score tied at 21, a kill by junior middle blocker Destinee Sales pushed the momentum for the Leopards.

La Verne were able to rattle off four straight points to win the set, 2-0.

The Leopards defense was able to hold senior outside hitter Allie Frappier to 16 kills.

“I was a little nervous at first being on the right side having to block Frappier,” Sales said. “But I think we did a great job as a team stepping up to the challenge.”

Frappier had high of 32 kills in one match just the weekend before.

“The game plan was to contain their offense and not focus on any one player,” Panatier said. “Our goal is to be making sure that we are taking care of our side, and if we take care of the things that we need to take care of we can attack their side. We knew Frappier was a great player and we had to respect that but we also could fear it.”

Junior outside hitter Brittany Yaxley one-upped Frappier with 17 kills and 11 digs to help lead the Leopards.

“Our defense and serve receive was on fire the whole game,” Sales said. “The teams energy was one of our key components to win because our coaches told us our energy was a direct reflection of our strong defense.”

“We have been working really hard on our blocking and our server receive as a team and that paid off today,” Yaxley said. “We’ve been able to run and set to our middles which is a big reason why Kelsi had 16 kills today.”

Yaxley said the serve receiving ability, and the blocking ability for the Leopards this year is one of their strong suits that can help make them contenders.

“It feels really good to be a part of the team that supports one another,” Yaxley said. “Everyone is a vital part of our team. Our setters can set everyone because we are all around a stable team.”

Yaxley and Robinson led the team again with 12 and 11 kills respectively.

La Verne also had a huge boost from junior outside hitter Ashlyn Cross, who had 10 kills of her own.

The Leopards are second in the nation, averaging 2.69 blocks per set.

The Leopards next match is at 7:30 p.m. Friday at Occidental.