By Emily Bieker, Gabriella Chikhani on November 14, 2014 in LV Life 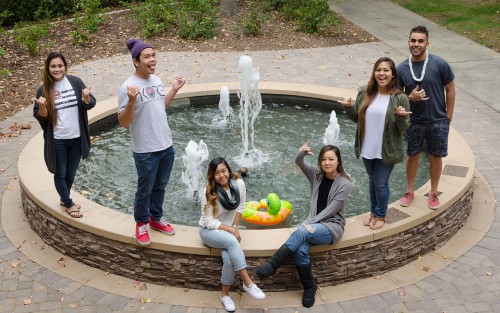 The mission of Kanaka Hui Ohana is to promote Hawaiian culture on the University of La Verne campus. The executive board includes junior secretary Lexi Takanishi, senior treasurer Eldric Rabago, junior vice president Jolene Nacapuy, sophomore historian Hayley Kurisu, junior president Jairian Ka’ahanui and junior social chairman Zack Gonzalez. All students are welcome to join the club, but for members who hail from Hawaii, the club is a reminder of home. / photo by Emily Bieker

When translated, Kanaka means people, Hui means club and for those who have not seen the movie “Lilo and Stitch,” ohana means family. Kanaka Hui Ohana is the official name for the Hawaii club at La Verne.

With more than 30 members and five executive board members, Kanaka Hui Ohana is open to all who share an interest in Hawaii and its culture, enjoy eating and like to have a good time.

Members go out of their way to reach out to incoming students from Hawaii with welcoming notes and an invitation to attend their meetings.

“Being a member is a way for me to know that although I’m away from home I still have people to relate to and have a common ground with,” said Lexi Takanishi, junior business administration major and secretary for the club.

“It’s comforting to know that someone will understand what you’re feeling when you get homesick and you even get a sense of ‘Hawaii-ness.’” she said.

Jairian Ka’ahanui, junior communications major and president of Kanaka Hui Ohana, grew up in Hawaii and for the past three years has been living in La Verne.

During her freshman year, juniors in the club welcomed Ka’ahanui and invited her to join. Since, she has held the positions of vice president and president.

Most students on the executive board are juniors and are working toward creating a foundation and traditions for incoming members to carry on.

Takanishi has been the secretary for the past three years and said during their meetings they feast on good food, and members of Kanaka Hui Ohana, who are from Hawaii, teach other students “pidgin,” a form of short hand speech used in Hawaii. Some popular words include, “shoots,” which means O.K., bye or hi, and “pau,” which means done or finished.

Shane Rodrigues, broadcast operations manager, is the adviser and was a member when he attended La Verne.

“In Hawaii we have a lot of ‘pau hana’ parties, which happens after people finish work and we usually go to the beach or just bond over food and refreshments,” Rodrigues said.

Ka’ahanui said the club is working toward adding a community service aspect to the club.

Kanaka Hui Ohana is organizing a Rock painting event with food, and it is scheduled to happen later this semester.

In the spring, the group members plan on having a beach cleanup day which they hope to end with a bonfire along Newport Beach.

“I like being around people I can relate to, and coming from a whole different place it’s nice to know that I have a second family here,” Takanishi said.

Kanaka Hui Ohana is also organizing a Christmas program at the Hillcrest Homes retirement community in La Verne. The club will perform Hawaiian Christmas songs and give out presents.

Meetings are 10 p.m. every other Wednesday in the Campus Center Ballroom.

“It acts as a support group for those who get homesick because when they bond they forget about being homesick,” Rodrigues said.