By Catalina Diaz, Tyler Evains on May 25, 2018 in Feature Slider, News 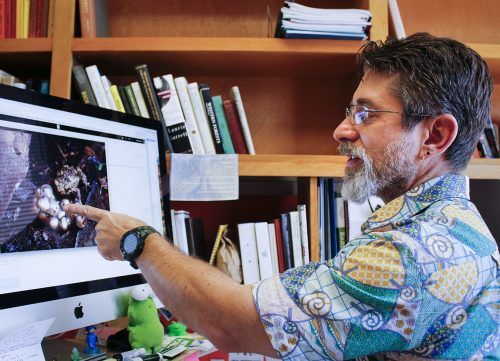 David Bickford, Fletcher Jones Endowed Chair in Biology, describes how a male frog protects a female’s eggs until they are ready to hatch. Bickford discovered a new species of Choerophryne, a small frog characterized by its long, narrow snout, in 1996 during his dissertation research in Papua New Guinea. Fred Kraus, research scientist of ecology and evolutionary biology at the University of Michigan, named the species Choerophryne Bickfordi, after Bickford in February. / photo by Tyler Evains

It is not every day that a biologist gets a species of frog – or any amphibian for that matter –named after him.

However Associate Professor of Biology David Bickford, learned recently that his research and discovery warranted just such an honor.

The Choerophryne Bickfordi, a species of frog, was named after Bickford in February.

“Most of the time, people are dead before they get a species named after them,” said Bickford, an evolutionary ecologist, and one of the two Fletcher Jones Endowed Chairs in Biology, who started at the University this academic year.

Bickford, who focuses on amphibians and reptiles, spent four years in Papua New Guinea in the 1990s, researching and studying alongside ornithologists, mammologists and locals to discover new species of frogs.

Bickford spent much of his time in Papua New Guinea completing his dissertation, which did not allow him to entirely focus on the describing process.
Describing a species means giving a formal description of the newly discovered organisms.

Amid this process, scientists must explain how their findings differentiate the new species from those previously described.

“I’m more of an explore and discover (person), and then try to do the bigger picture,” Bickford said. “This is really meticulous, with tons of individual characteristics that you have to know and understand to differentiate between what’s a new species and what isn’t.”

A variety of frog trinkets and amphibious art that Bickford has collected throughout the years cover the shelves of his office inside Mainiero Hall.

“You collect it, you take DNA, behaviors and even the frog call, and write it up. Then you give it to a museum and a lot of times, scientists eventually come back and describe new species from that.”

Though Bickford did not formally describe the species, he collected specimens throughout his expeditions and donated them to museums around the world.

His colleague Fred Kraus poured through the data at the Smithsonian in Washington, D.C., and put together over 20 descriptions from Bickford’s collection, where he then named one after Bickford.

Kraus, an evolutionary biologist and assistant research scientist at the University of Michigan, formally described the Choerophryne Bickfordi to the Biological Society of Washington and the description was published Feb. 26.

According to the abstract in Kraus’ publication, the frog is “a new species of small microhylid frog from the southern versant of New Guinea that is characterized by its long and narrow proboscis, relatively large size and long legs, narrow discs on all fingers, hidden tympanum, and details of color pattern.”

Bickford said that some scientists criticize the idea of naming species after humans and prefer naming them after their characteristics.

“I told them, well it does have a big nose and it really does have a loud call, so it might be kind of like me,” Bickford said.