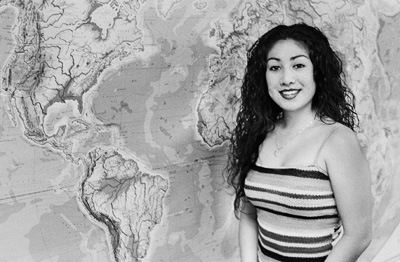 With a major in public administration, Giselle Matus has been able to do two internships in Washington, D.C. Matus now has plans to move to Washington, D.C., to start her career and will be the student speaker at Commencement. / photo by Natalie Fowle

Ambition, hard work and the ability to work in the nation’s capitol has given University of La Verne senior Giselle Matus a jump start for what her future has in store.

For the past four months, Matus has been an intern in Washington, D.C., for the National Association of Schools of Public Affairs and Administration.

The public administration major was in charge of organizing research for 245 universities and colleges as a diversity coordinator.

After finishing her general education courses, Matus had to make a decision on what to do with her life. After researching majors, she decided on public administration.

With a degree in sight, she wanted to go to a place where she could really indulge in her major.

“I asked myself, ‘Where is the best place to go for administration?’ Washington, D.C.,” said Matus.

Doubtful, she applied for a job there and was elected to go.

During the Spring semester of her junior year, Matus took her first internship offer in Washington, D.C., Matus worked for a nonprofit group titled “Presidential Classroom in the Nation’s Capitol.”

There, she worked 15-hour days with a one-day break per week.

“We worked like dogs, so I didn’t really get to experience D.C. when I went,” said Matus.

Matus was not satisfied with her first experience, so she tried it again this past semester.

“I wanted more out of my experience, and I didn’t think I got it the first time,” said Matus.

Matus made many strides toward a solid career while on the East coast. She said it was a great experience to meet people and network.

Being on her own helped her develop street-mart skills and to stay economically balanced.

The experience has challenged her and given her a sense of confidence.

Matus was raised locally in San Dimas. The oldest of three children, she is the first to attend college. She is happy to be back spending time with her brother and sister to whom she is close.

“We are the best of friends. We do everything together,” said Matus.

Matus enjoys being around her family, but what really gets her on a high is her ability to dance. Matus is a Mexican Folk dancer. Whenever she has the chance to break loose at a club or give a performance, she jumps at the offer.

“Dancing is my release,”said Matus. “It’s the way I can express myself.”

Matus has proven herself at the University as a strong team player in many involvements.

Matus has been an Orientation Week Leader (O.W.L.) for the incoming students at La Verne, as well as a marshall for the graduation ceremonies. She also has had the privilege to experience the duties of a resident assistant for one semester.

“I have been able to count on faculty and administration here at school,” said Matus. “They have been really supportive.”

The group that Matus has stayed with throughout her college career is her sorority. As a member Phi Sigma Sigma, she has served in many executive positions and has been part of numerous committees.

Matus has received numerous awards here at La Verne, along with her steady 3.5 GPA.

Two awards stand out the most. The first is the Dean’s Service award. The other is the recognition in the Who’s Who Amongst Colleges and Universities.

“You do stuff and you don’t think people notice, and when they do, it makes you feel proud,” said Matus.

She has also recently been chosen as a commencement speaker at graduation.

Matus has already received a job in Washington, D.C., with a nonprofit organization called America’s Foundation.

She will be working for Latinos nationally and internationally, helping people from immigrants to large Latino business corporations.

“I encourage people to take an internship, because it helps you learn about what goes on in the professional world,” said Matus.