By Campus Times Editorial Board, Natalie Fowle on October 13, 2000 in Editorials, Opinions 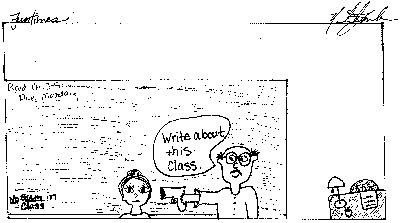 It is fairly common for students to get some sort of assignment that pertains to their reading for an English class. For example, students may be reading Romeo and Juliet and they may get an assignment from their teacher in which they must pretend to be either Romeo or Juliet and write a journal detailing what they would have done. That kind of assignment is expected from a teacher.

But when a teacher assigns a journal about how to assassinate a person and how one would get away with it, many eyebrows go up and many parents get scared that their children will end up dead. When that happens, it will not just be because of a crazy student, but also the result of a teacher who obviously did not think of the consequences his assignment would bring to everyone-even himself.

Not too far from the University of La Verne campus, a Covina High School teacher, Andrew Phillips, gave his students an assignment to plan an assassination of someone they would like to kill, explain why they would kill that person and how they could do it without getting caught.

This assignment was given after students read Edgar Allan Poe’s “The Pit and the Pendulum,” in which a person faces death either by falling into a pit or getting sliced to pieces by a swinging pendulum.

Students with strong religious beliefs had a problem with the assignment because it involved killing someone.

The students complained to administration about the assignment, and as a result, the teacher is no longer employed because the assignment was not authorized, according to Louis Pappas, assistant superintendent for the Covina Valley Unified School District.

To make such an assignment is enough to reveal another Eric Harris and Dylan Klebold, the student duo who killed their classmates at Columbine High School in Littleton, Colo. Somebody in Phillips’ class could have an agenda similar to Harris and Klebold’s. The two even made a violent video that some of their friends saw, yet no one did anything. Many at Covina High School wondered, “Do we want that to happen again because of this assassination assignment?”

This has made parents wonder, “What kind of people are teaching our children nowadays?” With the shortage of qualified teachers, many school districts are forced to recruit anyone that they think is sane enough to actually teach. However, many of these people do not even have credentials to do so. At some schools, the California Basic Educational Skills Test is enough to let someone become a substitute teacher.

At this point, nobody has been able to reach Phillips for comment. Perhaps he was not properly trained to be a teacher and the district just hired him simply to have someone to teach, period. Or maybe he just made a mistake. Is it worth the risk?

It used to be that being a teacher was worth something. But being a teacher also meant having adequate experience and using it in the classroom. Although teachers come and go in students’ lives, there is always one teacher that can make a difference. It is that teacher who will either provide the determination a student needs to reach out for greater things or end up traumatizing the student and lead the student down a dangerous road.

The purpose of teachers is to teach students to become better people and to contribute to a better society, not a worse one, and that is the way that it should always be.