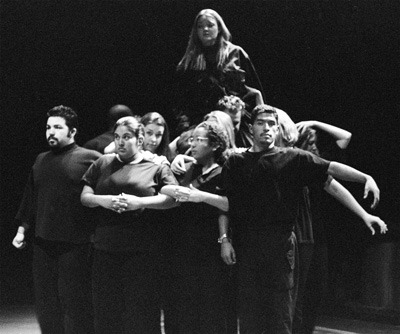 The Termite Queen, played by Jennifer Holindrake is held by Chris Folden, Amber Salmeron, Chastity Archer, Belinda Ortegon, Casey Kendel, Hugo Valencia and Jessica Wotherspoon in a scene from “Tom Paine” by Paul Foster. The play is in Dailey Theatre Nov. 10-11, 16-18 at 7:30 p.m. and Nov. 19 at 2 p.m. / photo by Natalie Fowle

The Dailey Theatre at the University of La Verne has been the host of many theatrical productions, but now presents more than just a play.

“Tom Paine,” directed by Steve Kent, Professor of Theater Arts, is the most recently completed play by the ULV Theater Arts Department, opened last night, and focuses on more than just theater. “Tom Paine” is a production that is relevant today because it is an election year, and the play’s subject is revolution.

On the advertisements for the play, one reads, “Without Tom Paine, there might have never been an American revolution.”

“Now, especially during an election period, this outrageous, funny, bawdy, scary, confrontational musical play reminds us to reflect on what it means to be an American and what we want our country to be,” Kent said in his director’s notes.

Kent also said that the play is not controversial, but it is mature. “Any thinking adult wouldn’t be offended,” he said. “It brings up issues like, ‘What is freedom in America?’ ”

Tom Moose, a ULV alumnus who took the leading role as Tom Paine, said that the play is an ensemble play, meaning that each actor or actress plays several characters that interact. Moose, who is passionate about the play’s subject matter, said that he was thrilled to be cast for the part by Kent, whom he had the opportunity to work with in a few workshops and classes previously.

“Everybody is pulling the show. There is not one character that is unimportant. We’re a real unified cast, and the results of that will be exciting.”

Ken Britton, a freshman, plays King George as well as King Dodger. “It will be a rip-roaring time. If we’re having a good time on stage, then the audience will also have a good time,” Britton said.

According to Britton, the cast did an extensive two week reading on “Tom Paine,” and tried to understand the play. After everyone understood what the play was about, they then tried to determine characters by choosing parts, “and whoever was the best for each part, got it,” Britton said.

Many of the cast members for the play put in extra time to work on the set. “We’re all supposed to help building sets, and a lot of people come in and give their time,” said Britton.

Sophomore Chris Folden said “the play gives an important outlook on the history of America. It’s important to learn about things that have so drastically changed our country in the past, so that we know how to in the present, and in the future.”