By Kenneth Todd Ruiz, Sylvia Castellanos on May 16, 2003 in Community News, News 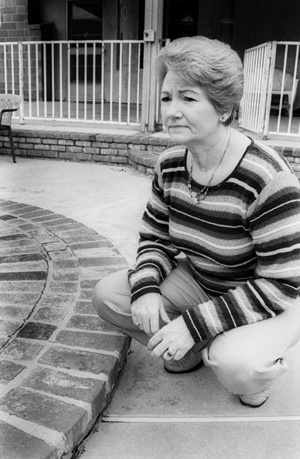 Sharon Dina is one of five La Verne residents suing the city of La Verne, Cal Trans and Yeager Skanska for structural damages brought on by the construction of the new 210 Freeway. Since March 9, Dina has reported seeing more than 40 cracks in her home’s foundation and structural lumber throughout the house, as well as broken pipes to her spa. / photo by Sylvia Castellanos

Several La Verne residents have filed complaints with the city as a precursor to a class-action lawsuit over the impact of the 210 Freeway extension, which they say has made their homes uninhabitable.

The group, represented by attorney Edmund Hoy, is seeking compensation for the value of their homes from the city, the California Department of Transportation and Yeager Skanska Incorporated, which constructed the extension.

In the complaints, filed with the city in March, the five homeowners at the end of Beaver Way alleged actual damages caused by the “increasingly high level of noise, increasingly severe vibration, serious air pollution, and severe structural damages.”

Another seven residents are considering joining the suit before a May 24 filing deadline, six months after the freeway’s completion.

“We are asking them to condemn the houses,” said Sharon Dina, one of the homeowners.

According to La Verne Assistant City Manager Bob Russi, the claims were rejected by the city council in April, following the recommendation of a third-party administrative adjuster. Russi said filing such claims is required under law to pave the way for litigation.

Dina claimed that more than 40 cracks have developed in the exterior and interior of her 25-year-old home, of which she is the original owner. Dina said repair estimates the damage have exceeded $50,000. As a retired widow on a fixed income, she said she cannot afford the repairs.

“They told us squat,” Dina said.

“The freeway was not built correctly, all-in-all,” said Jonathan Risco, another homeowners who is also suing. “The plans said it would be sunken all the way through the city.”

Russi said the freeway has been zoned since the 1950s and that the above ground portion at the heart of the matter predated the recent construction as the former end of the freeway.

“In our preference we would like it below ground for the entire city,” Russi said. “However, Caltrans was not going to remove a pre-existing portion of the freeway.”

Caltrans, he said, had no legal obligation to make any changes to the original plan: it agreed to depress the freeway after requests from the cities affected.

“I voted for the freeway,” Dina said. “I think it is a good thing. They told us, though, it would be depressed 20-feet below ground level.”

Visible cracks spider throughout the concrete surrounding Dina’s backyard pool, and along the interior walls of her home. The work, she said, disturbed the pipes under her home, affecting her swimming pool and indoor heating. A structural engineer has since determined the foundation of her home to be damaged, she said.

The homeowners also claim the 14-foot high sound wall dividing their homes from traffic speeding by several feet away is inadequate.

“There is not a room we can escape into to get away from the sound,” said homeowner Sharilyn Morell, who has to place towels under closet doors to keep them from rattling loudly.

Caltrans declined to comment, and legal representatives from Yeager Skanska could not be reached.

Although Hoy, the homeowners’ attorney, declined to comment on the lawsuit, residents said they are seeking to have the construction and its impact declared as “inverse condemnation” of their homes.

The basis for this claim lies in the Fifth Amendment of the Constitution, which states that “private property (shall not) be taken for public use, without just compensation.”

Seeking “inverse condemnation” is a legal claim that by rendering their property uninhabitable, the government might as well have condemned it.

The homeowners believe their property has been “taken” in the Constitutional sense, and that they should receive fair market value under the law.

The pollution from traffic is another concern. Dina worries about the impact on the health of her family.

She said the only option remaining is to leave the home she bought 25 years ago with her husband, who died in 1990.

“We have no choice,” she said.