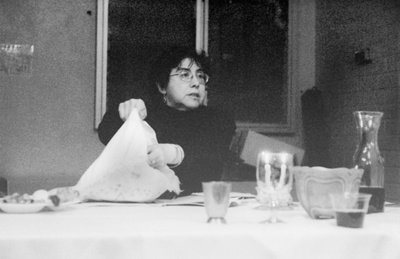 In the Jewish tradition of the Seder, Rabbi Leslie Bergson places matzoah into a ceremonial cloth at the University of La Verne’s Model Seder on March 5 in the West Dining Room. Rabbi Bergson, Jewish chaplain for the Claremont Colleges led the seder was a retelling of the story of exodus in honor of peace week. Peace week was sponsored by the Peace Studies Program, Campus Ministry, MUN, ASF, Amnesty International and the Church of the Brethren. / photo by Jennifer Contreras

Last Wednesday, more than 50 people gathered in the West Dining Room for a model Jewish Seder, a ritual dinner that was part history lesson, part sing-a-long and part training session.

Emcee for the semi-traditional dinner was Leslie Bergson, a guitar-wielding rabbi and Jewish chaplain of the Claremont Colleges.

“The Passover Seder is a meal that is also about teaching,” Bergson said. “It’s a stylized meal based on scripture, with an element of a Greek symposium. “We are all participants this evening, not spectators,” she said before beginning.

And participate they did. Alternately reciting passages, prayers and songs while interacting with an array of symbolic food items, everyone present took turns reading aloud the story of Moses’ liberation of the Israelites from slavery in Egypt.

The vocal element is essential to the experience as the seder is a modern, living product of ancient oral traditions. Long before the advent of the Internet, or even Gutenberg’s press, knowledge was passed on through the art of storytelling. These oral traditions were the only record of all human history, folklore and practical knowledge ­ easily lost without a living voice to tell them.

The absence of written rules, however, made it a powerfully dynamic process. Narrators could keep their stories relevant by updating and recasting them for new audiences. No longer a purely oral event, seders evolved to feature a Hagadah, which serves as a script for the ritual. In keeping with the flexibility of the oral tradition, the seder is not a strictly defined or dogmatic procedure. The Hagadah used by Bergson, “The Rainbow Hagadah,” was written in 1984 by Rabbi Arthur Waskow of the Shalom Center. It draws parallels between the strife of the exodus and that of the 20th century.

“The Rainbow Hagadah” evinces an anti-war theme, emphasizing the horror of nuclear weapons:

“We are the generation that stands between the fires. Behind us is the flame and smoke that rose from Auschwitz and from Hiroshima. Before us is the nightmare of a flood of fire: a thermonuclear holocaust that could make every city a crematorium without a chimney.”

This hagadah, or “telling,” is only one of thousands that exist. There are countless thematic varieties of haggadot for audiences such as vegetarians, single-parents, feminists and Dr. Seuss fans. There was even a hagadah for Jewish Confederate soldiers in the American civil war.

Portions of the model seder were overtly entertaining. After the feast, the ritual could not proceed until the game, best characterized as “hide the afikoman,” was resolved.

At the start, Bergson had broken a matzah in two and placed the larger piece, the “afikoman,” on a table behind her with stern warning that it was not to be touched.

For the uninitiated, this was taken as a serious admonition. None of the gentiles present would have been so brazenly insensitive to disturb the afikoman, no matter how much it resembled a broken cracker in a paper napkin.

When the afikoman later turned up missing, it took intensive negotiating and a few quarters to win it back from three year old Michael Davis.

Such entertainment serves ostensibly to keep young children engaged and interested, but is probably helpful for adult participants counting the number of pages remaining before the next glass of wine or chance to eat.

If the seder were merely the commemoration of a historical event, it probably would have fallen out of tradition long ago.

Its longevity is due to the universality of its theme.

Overcoming bondage and slavery to achieve liberation are important human themes of transcendance.

The Egypt of Exodus, where the Israelites were enslaved, is referred to as “Mitzra-yim,” or literally, the “narrow place.”

Mitzra-yim is more than Egypt, it represents any narrow place we find ourselves trapped; from the mundane to the metaphysical, the physical to the psychological.

“Mitzra-yim means the narrow place ­ the place that squeezes the life out of a human soul and body,” according to the hagadah. “No one place is always Mitrzra-yim, but any place ­ even our own ­ can be turned into Mitzra-yim.”

Portions of the ceremony felt rushed, with some instructions from the hagadah overlooked or skipped.

There was some confusion among the uninitiated gentiles, who were seen scrambling to keep up with the singing, reading, glass raising, and parsley dipping fun.

Being a dry run for the real Passover seder, Bergson recommends attending in April for the full experience.

Passover begins this year on April 16, and Bergson said all are welcome to the seders she will host on April 16 and 17 at the Claremont Colleges.