By Bailey Porter, Sylvia Castellanos on March 26, 2004 in LV Life 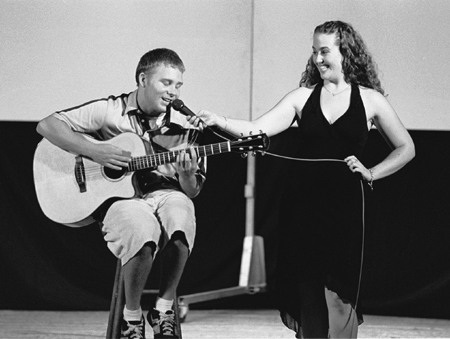 Taylor Harry performed an original song as his talent showcase section of the Mr. ULV Pageant. Sara Kirk, a KULV DJ, co-hosted the pageant held in Founders Auditorium, sponsored by ASF. Harry, a freshman, swimmer and water polo player for the University of La Verne, was chosen as 2004 Mr. ULV after the casual, formal and beach wear competitions in the pageant. / photo by Sylvia Castellanos

The only thing missing was a tiara and the Miss America wave as the first “Mr. ULV” in the University of La Verne’s history was announced March 18.

“We thought it would be fun to give it a twist and make the guys go through what the women had to do,” said Travis Berry, ASF president.

Holding together the entire night was KULV’s Sara Kirk and Brian Juliussen who hosted the event.

Aside from giving out prizes to participating audience members, the duo encouraged each contestant to play up the audience’s support.

The judging relied entirely on applause from the crowd of nearly 250 people.

And the contestants knew it, strutting their stuff across the stage and giving it all they had with each nod to the audience and swagger as they made their exits backstage.

Never have there been so many excuses to show off toned pectorals on this ULV stage. Shirts had a way of getting in the way as many of the contestants completed their talent and beachwear categories – contestants just kept taking them off.

Then it got down to baring almost all. The crowd did not seem to mind and went wild when audience favorite Harry answered his beachwear question: “What celebrity do you think you look like?”

Harry played the guitar and performed a song he wrote himself, much to the liking of the crowd during the talent portion of the event.

Other Mr. ULV hopefuls recited poetry – yes, poetry they composed for their moms – rapped, danced and otherwise got the crowd howling with appreciation or surprise.

Blaine Bacher, a sophomore history major, attempted to chug a gallon of milk and ended up drenching himself, and the stage, in the process.

Bryson Miller, a junior biology major, was a little bit brawn and a little bit David Blaine as he wowed the audience with balancing tricks, working up from balancing a stool to a 50-pound table on his chin.

Answering the final question posed by Juliussen and Kirk, Bacher said that he would not just say he wished for world peace, but that all his friends and family live happy, prosperous lives. Miller offered specifics, saying he hoped the science department would be granted more funding for more instruments and equipment so that they could remain competitive against other universities.

Luis Chavez, a junior communications major answered a question about his ideal family by motioning to his family in the audience. He said that his family was ideal because his siblings and parents work hard for each other.

With a last request by Kirk for the contestants to show off their backsides to the audience, the judges began to deliberate to come to a final decision – taking their time and causing the hosts to use up all their material.

“It was the greatest time ever; the boys did a fantastic job,” said senior liberal studies major Erin McAndrew, one of the judges.

“Taylor stole the show,” she said.

“I foresee this event happening next year and being a success just as it was this year,” he said, adding that he would like to see more competitions within the event and possibly small scholarships awarded to the winners.

“It was very nice that the guys had the courage to enjoy it,” said Chavez’ mother Julia Chavez, adding that she was glad her son participated because he always enjoys taking part in ULV activities.

“I though it was great to see another side of the guys,” said freshman Natalie Camacho with a straight face. “It showed a lot of confidence.”