By Jaclyn Dino, Marilee Lorusso on May 9, 2008 in Baseball, Sports 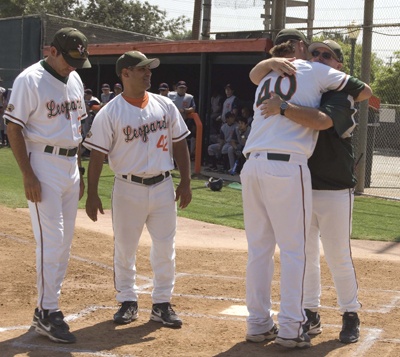 Assistant coaches Al Leyva and Dave Miranda and head coach Scott Winterburn celebrated as nine seniors played their last home game on May 2. After playing all four years at La Verne, pitcher Ryan Rose took the day off to rest his arm for the NCAA West Regional on Wednesday in Abilene, Texas. Rose started game three of the series against Pomona-Pitzer. / photo by Jaclyn Dino

The University of La Verne baseball team not only swept a three game series against conference foe Pomona-Pitzer, but the Leopards clinched the Southern California Intercolleg­iate Athletic Conference title for the 19th time in the University’s history.

“It was so hard to contain ourselves,” senior pitcher Ryan Rose said.

“When the ninth inning came around, we were ready to go (dogpile).”

The University honored the nine seniors from this season’s squad before Friday’s game.

Those who were honored included the seniors who have been a part of the program for four years including: Rose, Erik Beckman, Brandon Mikkelson and Jimmy Wilfong.

Seniors Scott Marcus, Trevor Boucher, Jack Mehl, Ryan Jordan and Mike Sechi were also honored for their contributions to La Verne baseball during their time with the program.

La Verne hosted the Sagehens on Friday at Ben Hines Field. ULV went into the series knowing a sweep would be necessary to continue into the postseason.

“We could only worry about what we could control,” junior relief pitcher Allen Komori said. “We knew that we had to sweep.”

The Leopards were able to defeat Pomona-Pitzer with the closest score of the series, 8-7.

In an opening inning that would be back and forth between both teams, sophomore Tim Jolly got the start for the Leopards.

The Sagehens kicked off the game with two runs scored in the first inning.

La Verne was able to answer back after junior third baseman Mike Moretti and sophomore left fielder Jason Munoz put the Leopards on the scoreboard with three RBIs in the first inning.

La Verne led by four runs, with a 7-3 score, until the Sagehens answered back in the eighth with one run and in the ninth when Pomona-Pitzer rallied back to tie the game at 7-7.

“It got close in the ninth inning,” head coach Scott Winterburn said.

Stealing second base in the bottom of the seventh inning Allen Komori pinch ran for Jason Munoz who was hit by a pitch. La Verne won May 2 against the Pomona-Pitzer Sagehens 8-7. After winning the conference championship, the Leopards will play in the NCAA West Regional on Wednesday, May 14, in Abilene, Texas. / photo by Jaclyn Dino

It was down to the wire in the last inning of game one of the series, until Boucher hit a triple in the bottom of the ninth inning that would be a clutch hit for La Verne.

Game one of the doubleheader on Saturday was hosted by the Sagehens at Alumni Field.

Junior Jesse Sweet got the start on the mound for the Leopards, but was unable to contain Pomona-Pitzer’s bats as the Sagehens took a 4-0 lead after accumulating two runs in both the first and third innings.

It was in the fourth inning when sophomore Mike Belcher put La Verne on the board with a single that would drive two runs in after pinch hitting for sophomore center fielder, Demetri Mondotte.

La Verne’s offense continued to gather runs as Boucher drove two more runs in the fifth after a single to right field.

In the sixth, Mehl’s double brought in another run for the Leopards.

With Boucher’s sacrifice fly in the seventh, senior designated hitter Marcus was able to score.

The Leopards would score one more time on another sacrifice fly by Marcus scoring senior shortstop Mehl in the eighth inning solidifying a win in game two of the series with a 7-4 victory for the La Verne.

In the final game of the series, Moretti sparked off what would be a huge win for the Leopards with a three-run home run in the third inning.

La Verne solidified their lead scoring one run in the fourth, five runs in the fifth inning followed by a three-run sixth inning and one run seventh.

Komori came in during the seventh inning to relieve Rose.

“I was just trying to get the last three outs for my team,” Komori said.

Pomona-Pitzer was unable to get a rally started in the final innings of the game.

Rose got his seventh win of the season with a final score of 13-3.

“We got a chance to win the game and celebrate as a team,” Winterburn said.

“I thought we played pretty consistently throughout. The difference really was Pomona-Pitzer ran out of energy and will,” Winterburn said.

Winterburn said though winning the title was also dependent on the outcome of the Claremont-Mudd-Scripps and Redlands series, he kept his team focused on themselves and their series with the Sagehens.

“It’s all going to work out based on how we do,” Winterburn said.

Redlands fell short in their series with CMS, winning only one game out of the series moving the Bulldogs to second place after leading SCIAC.

This time last season, both ULV and Pomona-Pitzer had their hopes come down to the wire as both teams were at the top of the conference standings with the decision leading up to La Verne’s final series against the Whittier Poets.

However, with the winning run left on base in both the ninth and 10th innings of the final game of that series, the Leopards finished the 2006-2007 season in second place behind the Sagehens.

Winterburn said for now, the game plan is to give his team a well deserved rest so that they can rejuvenate mentally and the focus will be endurance as the team may have four to seven games in one weekend during Regionals.

The Leopards will hit the road for the first game in the NCAA West Regionals in Abilene, Texas, on Wednesday.