By Andres Rivera, Rhiannon Mim on November 16, 2007 in Football, Sports 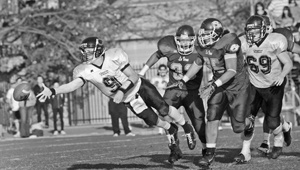 Junior defensive end (No. 33) Joshua Washington and junior defensive lineman Stephen James (No. 95) of La Verne pressured Chapman quarterback Eric Marty in the second half. Marty was forced to shovel a pass to running back Ian Galanis, who was tackled for a 1-yard loss by James. The Leopards fell to the Panthers, 31-27, in the last game of the season, bringing their overall record to 1-8. / photo by Rhiannon Mim

Wanting to end the season on a high note, the La Verne football team tried for another win but lost to Chapman, 31-27, ending the season with a 1-8 overall record.

Late in the fourth quarter, an interception by freshman linebacker Jordan Ginter gave ULV hope for a final scoring drive.

But 50 yards into the drive, the Leopards were unable to convert on 4th-and-1 from the Chapman 30-yard-line with 2:44 left on the clock.

After getting the ball back, Chapman (6-3 overall) ended up running out the clock to take the victory.

“We didn’t lose the game, just ran out of time,” junior running back David Merlos said.

Starting off on shaky ground, La Verne drove the ball into field-goal range in their first drive of the game but lost sophomore guard Josh Carrera to an ankle injury early, and stunted the offense’ momentum.

The Leopards failed to score on the drive after freshman kicker Taylor Hart missed the field goal attempt as the ball hit the post.

However La Verne soon recovered when senior tight end Anthony De Jager brought the ball to the 29-yard line leaving senior running back Chris Handy to take it all the way for a touchdown followed by a successful extra point by Hart, putting La Verne on the board with a score of 7-0.

Chapman soon answered back when senior strong safety Kaeo Kane intercepted a pass and scored a touchdown, tying the game 7-7 with five minutes left in the first quarter.

In the second quarter the Panthers looked to take the lead with a successful field goal attempt by Brandon Koller, helping Chapman go up, 10-7.

In the second quarter, La Verne quarterback Troy Doolittle found a path and ran the ball for a first down to make way for junior running back David Merlos to rush for the touchdown putting ULV ahead 14-10.

“It felt good, like our offense could do whatever we wanted,” Doolittle said.

A series of turns made for an exciting end of the first half as La Verne intercepted the ball while deep in their territory.

The Leopards began to make strides for a touchdown but Chapman free safety Garret Earls intercepted the ball during La Verne’s second down.

Senior wide receiver Brandon Koller scored the first of two touchdowns as the Panthers took the lead, 17-14, going into halftime.

In the third quarter, Chapman tried to punt the ball clear but failed as senior linebacker Mike Worrell helped block a punt deep in Panther territory.

Merlos then finished the drive scoring his second rushing touchdown of the game. After a successful extra point, La Verne took the lead again, 21-17.

But Chapman would not let up as they secured two more touchdowns by Koller.

Taking back the lead, 31-21, the Panthers held off many attempts by La Verne to overcome their deficit.

Most notably, there was a momentum booster for the Leopards in the fourth quarter as Hart intercepted a pass and returned it for an 82-yard touchdown.

However Hart missed the extra point attempt, leaving the score at 31-27.

Although the Leopards drove valiantly in their final possession of the game, they were unable to continue their drive and the ULV defense ran out of time.

“It was fun to be a part of an exciting game for my last season,” Doolittle said.

As it was the last game of the season, President Stephen Morgan, Athletic Director Chris Ragsdale and head coach Andy Ankeny recognized La Verne’s seniors in their final home game.

The 15 seniors lined up with their parents on the field and were thanked for their contribution and efforts during their careers at La Verne.

“It’s heartbreaking,” Merlos said. “The underclassmen wanted to send off our seniors in victory.”

“I thought that we were going to have a good season this year,” Merlos said. “Coming up short a little cost us in the end.”

With the season behind them, the Leopards intend to rebound next year with a young roster and new goals for their 2008 season.

“We laid a good foundation for seasons to come,” sophomore linebacker Branamier Courtney said. “We got better as the season went on.”

Leopard Scoreboard
So much to be thankful for