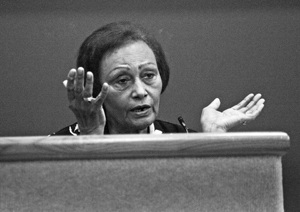 Describing the Islam religion and its attitudes toward women, Iraqi professor Fathia Al Joumaily spoke in La Fetra Hall on Wednesday on “The Role Of Women in Iraq: Then and Now.” Her talk was part of International Education Week, sponsored by the Honors and the Study Abroad programs. Al Joumaily, a sociologist and criminologist who served as a professor at the University of Baghdad, gave seven lectures during the week. / photo by Rhiannon Mim

Bringing to light the truth of a woman’s role in Iraqi society among other things, Iraqi criminologist and sociologist Fathia Al Joumaily began one of seven lectures as the international speaker for International Education Week on Wednesday.

Al Joumaily spoke to a full La Fetra Hall on “The Role of Women in Iraq: Then and Now,” where she highlighted the many rights that women have in her country, contrary to what the media portrays.

She noted that the amount of freedom and rights are being tested as the country continues to be unstable.

“Women everywhere are the same. But in Iraq, for the time being, they are different,” Al Joumaily said.

According to the Islam religion, women have rights and should be treated with respect.

There are people, however, that do not believe this is right and it is these people that take these rights away.

Al Joumaily stressed that the wrong does not come from the Islam religion but from the Muslim people who distort the religion.

“Their behavior is against religious law and the law of society,” Al Joumaily said.

After speaking on challenges Iraq is facing and the need for changes to be made in the way the law is enforced, she opened the floor for discussion.

“I was surprised that women had so many rights, from what she said,” Christabel Mashot, a senior international business and Spanish major, said.

“I don’t think there was enough time to get all questions answered. There is so much we don’t know about the country,” she added.

Questions ranged from differences in health care and abortion to women in education and the work force.

She noted that women’s health care is sufficient especially when women are pregnant.

She also said women are currently holding jobs that have been traditionally female dominated and women are well represented in universities, although that is being threatened by possible segregation of schools.

“I thought she was well spoken in her mind,” Robert Patton, a sophomore business administration major, said. “I don’t think she understood all the questions.”

Al Joumaily hoped this lecture and the others would help to educate the students and faculty on what is occurring in the Middle East.

“You have to bring people so that students will know what is going on,” she said. “It’s as if I open the window to the other part of the world. But I am only one person.”

Al Joumaily is a retired professor from Baghdad who is currently a Fulbright Scholar at the College of Mt. St. Joseph in Cincinnati.