By Andres Rivera, Jenna Campbell on April 8, 2005 in News 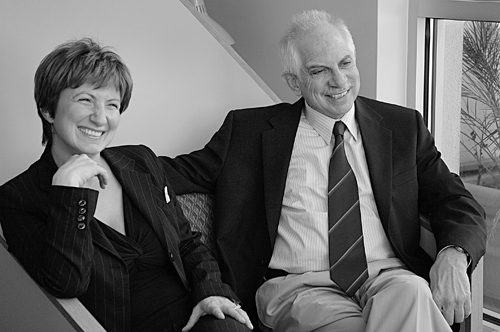 Accompanied for moral support by his wife Rosella Forte, Samuel A. Culbert, professor of management at UCLA’s Anderson Graduate School of Management, lectured Monday night in La Fetra Hall. Culbert is the author of “Mind-Set Management: The Heart of Leadership,” an important and practical work that describes the use of psychology instead of manipulation to influence others. The event was sponsored by the Master of Science, Leadership and Management Program, “Coffee, Cake, and Conversation.” This is the 10th year of the program. / photo by Jenna Campbell

In its 10th year, the Master of Science, Leadership and Management Program’s Coffee, Cake and Conversation series welcomed Samuel Culbert, co-author of “Don’t Kill the Bosses!” who addressed the complex nature of business and the importance of change in the traditional chain of command. The lecture and book signing took place Monday in La Fetra Auditorium.

Culbert began his lecture with an introduction to his management teaching methods at UCLA and how they are involved with his two books, “Don’t Kill the Bosses! Escaping the Hierarchy Trap” and “Mind-Set Management: The Heart of Leadership.”

“I tell students, leading is about staging for others to be effective, and the beginning point is getting human nature straight,” Culbert said.

While taking the audience of roughly 50 into his class atmosphere, he introduced the concepts of the books and went into further detail.

Culbert reasoned that because people have self-interested motives, using psychology as opposed to manipulation, in order for managers to give more productive advice would be effective.

“I like the way he mixed the real life examples into the theory, especially the mind-set one,” MSLM student Anne Marie Barreto said.

“And how everything should be addressed with authenticity and integrity,” she added. “I think that’s really important in an organization.”

After explaining the concepts in “Mind-Set Management,” Culbert introduced the role that “Don’t Kill the Bosses!” plays in his course.

He showed through his teachings in the course how this book introduces two-sided accountability, where both the boss and the subordinate is accountable and should therefore work as a team for success.

After his lecture, Culbert opened the floor to questions from the audience.

Once the question session was over, two books were raffled off.

The night ended with a chance for the audience to buy the books and have them signed.

“I liked his sense of humor,” said Ron Hurst, an MSLM student. “He had a wonderful perspective, one that I share and was a lot of fun to listen to.”

MSLM Coffee, Cake and Conversation series, which began in 1995, provides a presentation setting for prominent authors in leadership and management fields.

These events give the authors a chance to explain their books and to interact with their readers.

“It is an outreach to the greater community,” said Carol Sawyer, professor of organizational leadership. “It helps to make people become aware that the University is a place where interesting things happen.”

The MSLM has hosted almost 50 authors some of which have returned.

Some of the authors featured in the Coffee, Cake and Conversation series have been Mihaly Csikszentmihalyi, Margaret J. Wheatley, Peter Frost and Joan Goldsmith.

“It’s learning beyond the classroom,” Sawyer said. “It gives a chance to interact with the people that write the books we read in class.”

Culbert is recognized as being an expert theoretician in the management field.

He currently teaches leadership and motivation courses at UCLA’s Anderson School of Management where he has taught for more than 25 years.

Aside from “Mind-Set Management” and “Don’t Kill the Bosses!,” Culbert has written four other books and is currently working on another.