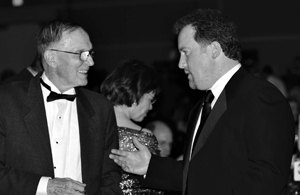 Biology Professor Robert Neher, who began his career as a teacher at La Verne College in 1958, greeted honored guest Dr. James Swift at the President’s Dinner Gala Saturday. The event, held at the Ontario Convention Center, raises money for scholarships and grants. It brought together faculty, alumni, staff, administrators and students from the University of La Verne. / photo by Leah Heagy

Joining past honorees like Sara and Michael Abraham, Terrence Deal and Rob Fukuzaki, Dr. James Swift was the recipient of the President’s Award at the annual dinner gala on Saturday.

The dinner honors the achievements and commitment to ULV made by individuals and is the University’s top fundraiser, which supports student scholarships.

Swift’s work as a pediatrician, CEO of the Children’s Healthcare Network and medical director of the Sunrise Children’s Hospital in Las Vegas warranted the President’s Award this year.

Opening the dinner, held at the Ontario Convention Center, was Mike Laponis, professor of communications and master of ceremonies for the evening. Adding a bit of humor and paying homage to the Academy Awards, a mock on-scene student reporter stood on the red carpet to greet latecomers while broadcasting live in the Mayoral Ballroom.

After opening remarks, student representative Monique Chambers, provided insight on the impact that school donors have on a student’s ability to afford college. Chambers, a senior biology major, gave her personal story on how attending the University has affected her life and assisted her in her professional pursuits.

She also presented Swift with an excerpt from a poem dedicated and written for him.

During the dinner portion, Reed Gratz, professor of music, provided music on the piano for the guests. A photo slide show was displayed on the screens near the podium showing Swift in key moments of his life.

As the guests finished their desserts, Morgan and family friend Mark Melchiori introduced Swift after viewing a video presentation, produced by the communications department, highlighting his achievements.

“If your child is ever in trouble…the only person you want fighting the fight is Dr. Swift,” Melchiori said.

The video provided a snapshot view of Swift’s life from his early childhood, high school and college years to his experience and growth as a pediatrician. The video also showed Swift’s human side with the testimonies of college acquaintances, co-workers and family members.

Aside from being the CEO of Children’s Healthcare Network, a company that provides assistance to children’s hospitals in the western United States, and treating countless patients while at Sunrise Children’s Hospital and Mountain View Hospital and Medical Center in Las Vegas, Swift has also co-edited “Pediatric Hospital Medicine.”

Upon receiving the award, Swift credited the University for preparing him to go out into the medical profession. He believes that it was La Verne’s faculty support and values that gave him the edge in being accepted to medical school.

“Wherever I go and whatever I do, I hope that I represent the quality of the University until the day I die,” Swift said.

Following the presentation and dinner, the dance portion continued for the night with the live band The Answer providing a classic rock soundtrack.