By Danielle Lampkin, Jaclyn Dino on September 14, 2007 in Sports, Volleyball 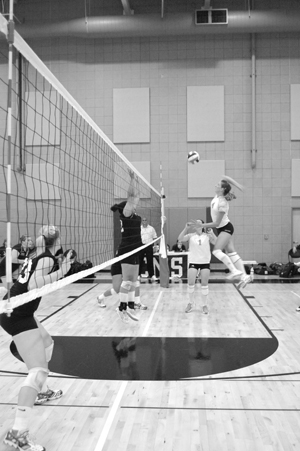 Emily James sets the ball to middle blocker Crista Jones. Jones, who last year was named All-West Region and SCIAC Freshman of the Year, was unable to help her team defeat the Pioneers. The Leopards lost in game five against Cal State East Bay, and would finish the Pacific Coast Classic Tournament with a record of 2-2. / photo by Jaclyn Dino

With victories on their mind, the University of La Verne women’s volleyball team competed among several teams in the Pacific Coast Classic hosted by Claremont-Mudd-Scripps last Friday.

In the main gymnasium, fans were scattered throughout chanting and cheering for their favorite collegiate teams. Such enthusiasm was shown for La Verne’s first victory of the season against the Thomas More Saints of Ohio.

“We have trained well and are a work in progress,” head coach Don Flora said.

Flora and his staff have been working hard to bring team unity amongst new and returning players.

“It was a very big goal of ours to be 1-0 at the beginning of the season and that is exactly what we did,” assistant coach Erika Chidester said.

After receiving All-American honors from Long Beach State, her transition to ULV has been a learning experience.

“I feel like the new freshman is [me] the coach,” Chidester said.

Although accomplishing a major goal with a big win, the momentum shifted for the Lady Leopards as they competed against Cal State East Bay, which came in as one of the top teams in the West Region.

Despite their first loss as a team against the Pioneers, the Leos were able to gain insight toward their season as a cohesive working force.

“There are a few components we are figuring out as a team, such as learning the ropes and understanding our roles as team members,” Flora said.

They were not discouraged but instead determined to understand and gain a team experience of pulling together and playing hard until the finish.

“We are a strong foundation and a program that is going to be developing even stronger than it already is,” said junior outside hitter Brianna Gonzales.

Overall the Leopards went 2-2 at the end of the tourney with their victories over Thomas More and Tufts in three game sweeps while dropping five game matches to Cal State East Bay and Puget Sound.

Following their tourney experience, the Leopards won all three games on the road against Occidental in their conference opener. Once again, sophomore Crista Jones and Gonzales led the charge for the Leopards, combining for 18 kills throughout the match.

In addition, serving was not a problem for the Leopards against the Tigers as they notched 13 aces in three games.

It has been a good start and the Leopards continue to remain positive for the rest of the season.

“It’s great to be back in the swing of things,” setter Taimane Suddeth said.

The Leopards, now 3-2 (1-0), will head on the road again to St. Louis where they will begin tournament play against No. 3 Wisconsin-Whitewater.