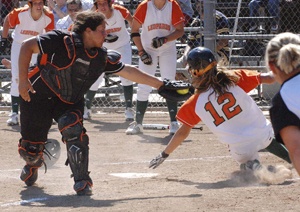 After Lynsey Padilla singled, La Verne first baseman Jodi Lindsay scored in the fourth inning on March 22. The game ended in the sixth inning after the Leopards pulled ahead of the Occidental Tigers, 11-2. Over the break, ULV swept Cal Lutheran on March 15, 5-0 and 8-7. The Leopards were not so lucky as they were defeated by Point Loma Nazarene on March 20, 8-0 and 8-0. But the winning streak came back as La Verne swept conference opponent Occidental, 6-5, and mercied the Tigers in game two. ULV also swept Menlo at home on Wednesday, 10-3 and 3-2. The Leopards sit in third place in SCIAC with a conference record of 6-4. La Verne will host Pacific Lutheran on Friday. / photo by Jaclyn Dino