By Danielle Lampkin, Jaclyn Dino on October 26, 2007 in Soccer, Sports 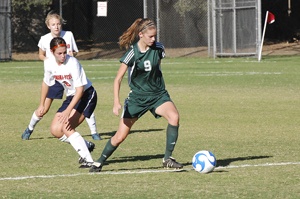 Despite its efforts, the University of La Verne women’s soccer team failed to gain a win last Thursday, with an upsetting 7-1 defeat against the Pomona-Pitzer Sagehens.

ULV traveled to Pomona-Pitzer with only 11 available players due to team injuries.

The Leopards competed against the Sagehens roster of 20 returning players from the 2006 season.

“Due to the lack of players, our game was affected,” senior midfielder Laura Larsen said. “The outcome of the game showed it.”

The Sagehens outscored ULV tremendously the first half of the game, allowing 7 scored goals, as the Leopards struggled with their offensive game.

Facing several injuries, La Verne’s strategy before the game was to get through and play hard regardless the substitute availability they had came with.

Known for being a young team, La Verne was not only faced with challenges in the number of new players on the roster, but also in team chemistry that has not yet developed.

Taking advantage of the number of players they had, the Sagehens dictated the tempo the entire game.

Many of the Leopards players injured coming from the defense side of the team did not help with the overall efforts either.

Regardless of the difference the Leopards battled back by not giving up or allowing a shutout in the game.

“Our ability to score in the last half shows the character of our team,” said freshman center midfielder Charlene Creighton.

Although there were issues with fatigue, the Leopards continued to play through what had first seemed to look like a one-sided game.

“They did not give up. They played with a lot of heart,”said freshman midfielder Andrea Rayos.

With about nine minutes remaining in the second half, sophomore defender Cindel de los Reyes prevented a shutout by scoring the Leopards’ lone goal.

“I scored, then the team got all pumped up. It was cool to see that we had not given up,” de los Reyes said.

Continuing to focus on team growth, ULV weighs out its overall team record in order to see the possibilities of next year.

“We have so much potential, I mean if you look at the beginning of our season up to now, we have grown so much,” Rayos said.

The Leopards (1-13-1 overall, 1-8-1 in conference) will now set their sights on their last two games against a pair of Southern California Intercollegiate Athletic Confer­ence rivals to finish the season.

The Cal Lutheran Regals will visit Ben Hines Field Saturday for an 11 a.m. contest, then the Whittier Poets will close out the year at 4 p.m. on Tuesday, also on Ben Hines Field.