By Danielle Lampkin, Jaclyn Dino on May 2, 2008 in Greek Life, LV Life 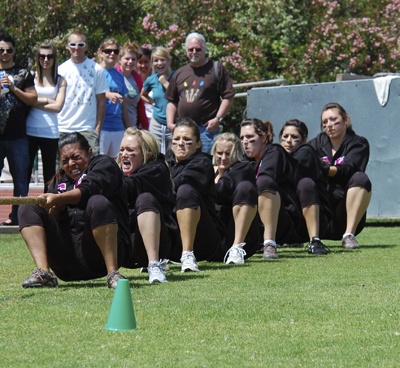 Sororities and fraternities challenged one another in Ortmayer Stadium April 24, competing in physical challenge events, which included running relays and the infamous tug of war.

Gaining points throughout the week by participating in several activities is typically most important for sororities and fraternities.

However with Sigma Kappa’s history of winning the tug of war, this event was about the bragging rights.

During the physical challenge events, sorority and fraternity chose a team of four whose total weight could not exceed 1,000 pounds.

The organizations then raced in a 4×400 meter relay.

In order to be fair, the race was adjusted to account for gender and physiological differences.

With weight playing an issue in this event, some participants tried to drop some pounds when training for tug of war.

“I’m happy that I lost weight,” Paine said. “I had a lot of military training, so I had lost weight for that too.”

While some lost weight from training for multiple things, there were other teams who were dieting and hitting the gym quite hard to make the weight.

The most weight lost by one single person was 30 pounds.

As the organizations ran their 4×100 race, Phi Sigma Sigma’s anchor leg, run by Tyonna Adams, injured herself with about 200 meters left in the race.

Dominating with their strong tug technique, Sigma Kappa started to look as if they were going to be holding onto their title a little longer.

Teams were shuffling, pulling, lifting and sitting, while some tried mocking the strategy taught by coach Wally from the Pi Kappa Phi fraternity at Cal State Fullerton.

“We really work on polishing their techniques and getting them ready,” Wally said.

While Sigma Kappa stormed past every organization, Phi Delta Theta won in a fought out effort, taking over the title as tug of war champions.

Cheers were heard on the other side of the campus after the victorious defeat and one more event of the physical challenge day still remained.

The final event for the day finished with another 4×400 relay race by each sorority and fraternity only to be told that the rule about the rubric concerning men and women was completely to throw them off.

In order for the relay winner to be determined each relay team would now have to race to beat their prior time for the race before tug.

Phi Sigma was down one team member after Adams’ injury and would have to get another girl to run one extra lap.

Teams seemed hot and tired in the afternoon heat, struggling to beat each other.

Sigma Kappa determined and motivated after a big upset, ran to the finish line earning them first place in the relay race followed by Phi Delta Theta and Sigma Alpha Epsilon.

The day brought out several organizations on the La Verne campus and other people who came out to enjoy the festivities.

“I think the sense of community is here and everyone cheering each other on is a great display of teamwork,” Mario Rodriguez, housing and residential life residence coordinator, said.