By Alex Senyo, Stephanie Arellanes on September 12, 2008 in News 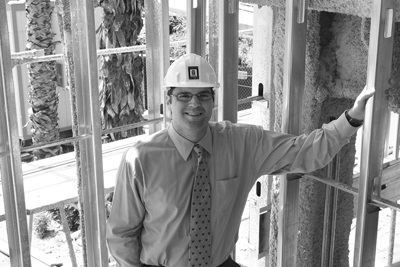 Working under the auspices of Facilities Management, Chip West oversees the construction details of the Abraham Campus Center. The facility will include the new Leo’s Den, a student convenience store, café, conference room, mailroom, office space and new classrooms. West formerly served as the assistant dean of student affairs and director of student life. / photo by Stephanie Arellanes

With the new fall semester, the University of La Verne has seen one of its most popular and active staff members, Chip West, take a new position and assume new responsibilities.

West, former assistant dean of Student Affairs and director of student life, has been reassigned to Phil Hawkey’s office of the executive vice president to be the director of the new Abraham Campus Center. In this new assignment, West will no longer be supervising ULV Student Life activities. In past years, when Student Life activities took place, West was there. But that is not the case anymore.

“I had expressed interest in the past,” West said about his new post. “I was offered the opportunity by the executive vice president, and I hit it. I thought it would be a great stepping stone.”

West is one of the prime people responsible for the new Abraham Campus Center, which has been the talk of the La Verne community for quite some time.

So far, he said the responsibilities have been immense.

From dealing with furniture, alarm systems and fire safety to communicating with contractors and student staffing, West is at the reins, all in hopes of meeting the University’s June 2009 opening deadline.

“I’m kind of the University rep for the project. The contractors and builders, it is just a building to them,” West said.

“I enjoy him as a supervisor and enjoy working with him,” Waite said. “His new duties are overseeing the new Campus Center, and I think he will do a great job.”

While West’s new responsibilities are to ensure the Campus Center lives up to everyone’s expectations and to oversee any final details and occupancy of the building, he will not stop there. When the Center is finally finished, West will bring his knowledge and experience of student management and relations to help keep the center and University connected and flowing. The main goal is to make the Campus Center the living room, or the center of activity, at the University.

“Overall duties are being defined as they go,” Waite said. “We are still in a time of change.”

West agreed, explaining that as things begin to settle down and become a little more solid, his duties will be changing. He is incredibly eager to take on his new title and work with new colleagues.

“I am working with Dave Koch and Roger Hardy. Great guys,” West said. “Roger is one of the smartest guys I have ever met.”

In regards to Student Life and any ties he may have had, it seems that West has already moved on from his attachment to Greek life and other student activities.

“I was there for four years, and I thought it was time to move on.”

West’s new office is located in the Facilities office on First and E Street.

Alex Senyo can be reached at alex.senyo@laverne.edu.