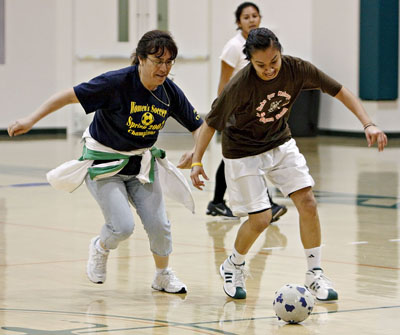 The Phi Sigma Sigma Kicks for Kidneys soccer game took place in the gym Wednesday night at the University of La Verne. It was $1 to watch the game, and $2 to play. The money for the game was donated to the National Kidney Foundation.

Along with the soccer game, other phi sigma members “rocked for kidneys.” They rocked in rocking chairs for thirty minutes straight without stopping all for the cause.

Phi Sigma Sigma sorority members as well as family and students attended the event. The soccer game consisted of rounds. There were two teams against each other, until the last two reining champions battled it out. The teams were “The Fighting Possums”, “The Champs”, “The Blue Devils,” and “Team Domination.” Some Phi Sigma Sigma members battled it out with some family members. By the end of the game, they were both tied, and went into sudden death with the family taking the win.

Jennifer Casas, was there to support her daughter, Valerie Casas, a Phi Sigma Sigma member. “I am here to support my daughter and donate money to the cause. Even though it is a little late I’m still here,” Casas said.

Along with the game and the rocking, there was also music and many were there to socialize. Jonathan Elias, a sophomore history and philosophy major, was there to be with his friends.

“I’m here to hang out and play,” Elias said.

After the game, although the players were exhausted, they felt they had a good workout.

“Man that was fun, and now I’m going to shower,” Elias said.

The event raised money for a good cause and people really enjoyed themselves.