By Kat Simonelli, Stephanie Ball on February 15, 2013 in LV Life 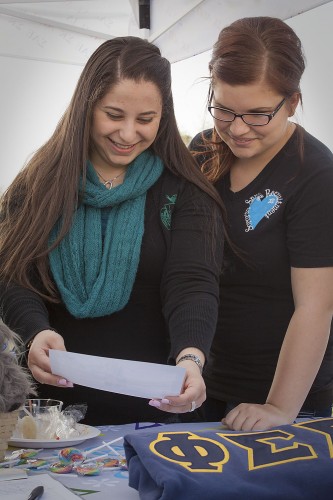 Senior business administration major Andrea Naccache, and senior art major Amberly Kastelic, College Panhellenic Association members, answer questions at the club fair Feb. 7. The fair was a part of Welcome back week that is held to reintroduce students to campus and invite them to get involved with different organizations on campus. / photo by Stephanie Ball

The University of La Verne hosted a club fair on Feb. 7 as a part of the welcome back week to kick off the spring semester.

The club fair took place in the south quad from 11 a.m. to 1 p.m. and provided the opportunity for students to learn about the different clubs on campus and make new friends in the process.

“I really liked being able to walk around and meet new people and learn about clubs that would benefit me in the future,” Daniela Tirado, freshman computer science major said.

The uni­versity not only provided the usual free food from Davenport Dining Hall but they also brought kettle corn and funnel cake vendors to the fair who gave out their goods to the students for free.

Many students agreed that the free food was a big hit at this university-sponsored event and is always a good incentive to come out.

Though some of the students were not planning on joining any clubs, Kylie Tang, a freshman business administration major said that she was keeping an open mind and was willing to consider any of the possibilities that the club fair had to offer.

One of the more popular booths among university students was the Kanaka Hui Ohana booth.

The Kanaka Hui Ohana club accepts all students and hopes to help the interested students at the University learn about Hawaiian culture, food and fun.

“The trick is you have to be enticing,” Jairian Ka’ahanui, communications major and Kanaka Hui Ohana club board member, said.

“We tell the students interested about all of the fun events that we have planned, such as our beach bonfire, luau, hula workshops and surf slip and slide,” junior psychology major and club president Janelle Lubong said.

They try to help their fellow students understand the distinctive aspects of their lifestyle and welcome them into their culture.

Another present, yet less advertised club booth was the University of La Verne Pep Band.

After being together for over a year, the band still receives a lot of confusion about their presence at university events such as the club fair, sporting events and other school functions.

“The goal of the pep band is to give University of La Verne students an outlet away from the monotony of school and to perform at sporting events and have fun,” Josh Williams, senior music major and Pep Band founder, said.

Clubs had many ways of drawing in a crowd such as free candy, small activities and big signs, but the most exciting of all was Phi Delta Theta’s free dunk tank. Guests threw a ball and sent brothers for a swim.

“We usually do something fun, last year we did pie a Phi,” Ziggy Azarcon, junior criminology major and member of the fraternity, said.

“It is something fun and interactive, instead of just passing out flyers with information,” Azarcon said.

Other clubs that were present at the fair include the Future Edu­cators, Enactus, Saudi Student Association, Black Student Union, Campus Activities Board and ASULV.