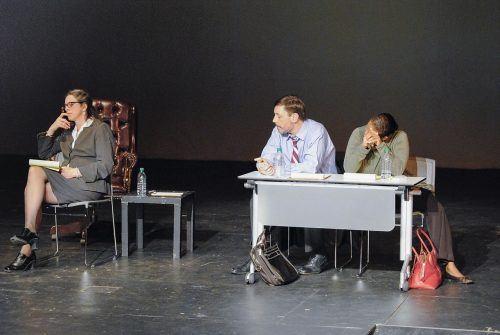 Actors Jeanne T. Arrigo, Jonathan Nichols and Risha Tanae Hill perform in “Defamation” Tuesday in Dailey Theatre. The play, written by Todd Logan, challenges the audience’s notion of religion, race and class by recreating controversial scenes from court rooms. The College of Law and the Office of Diversity and Inclusivity sponsored the performance for Black History Month. / photo by Nadira Fatah

The actors made their way to the stage, subtly signifying the start of “Defamation.” The lights dimmed and the debate between a black woman and a white man over stolen property began.

“It’s an interesting play about legal issues with audience participation, a learning opportunity for all students,” said Dean of the College of Law Gilbert Holmes.

The three-part play included a trial, deliberation, and a discussion.

During the deliberation portion, the audience was asked to act as a jury, deciding the fate of Ms. Wade.

The play received many perspectives on the trial when deliberation occurred.

The majority of the audience empathized with Ms. Wade. The jury ruled in her favor, stating that her argument of her innocence resonated with them more.

“Defamation” is centered on issues such as racism and classism.

“There’s not a tendency to have a conversation about race, class, and gender,” said senior English major Carlos Yanos. “The play was necessary. Everyone has different perspectives and I took it very personally due to my past experiences.”

The play was sponsored by the College of Law and the Office of Diversity and Inclusivity for Black History Month.

“This play was for the purpose of Black History Month, which is something I personally support,” junior business administration major Cynthia Ramirez said.

The reaction of the audience varied across the board.

“I come from a poor, working class family and saw that the environment was describing was very similar,” Yanos said.

Despite the subject matter, the audience still found humor in the play.

Deborah Lee can be reached at deborah.lee@laverne.edu.