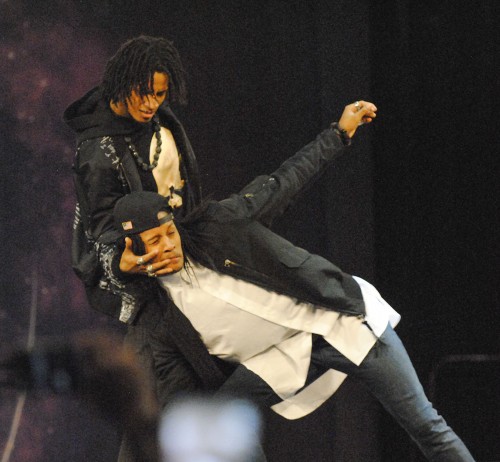 Professionally known as Les Twins, identical twin brothers Larry and Laurent Bourgeois perform at World of Dance 2016, a worldwide dance competition, on Saturday at the Fairplex. Les Twins started dancing hip-hop with an emphasis on isolation, or the movement of one part of the body independent of the rest, when they were just 4. They now perform with artists including Beyoncé, Missy Elliot and Big Sean. The next stop on the World of Dance Tour is Shanghai. / photo by Nadira Fatah

Dance crew Identity X’s dedication shined during their performance, and so did the pain, sweat, and tears of every other dancer that graced the stage of the World of Dance tour.

The tour graced the Fairplex last Saturday with its talented, international dancers and entertaining battles.

World of Dance is an international competition where hard-working and passionate performers show off their best moves and shine.

The event tours in over 19 international markets, and brings together urban dancers and enthusiasts from all corners of the world to share the mutual love of dancing.

With the Fairplex being its place of origin, the event was held in two buildings.

One building held vendor booths and two small stages, with one stage having a freestyle dance battle open to anyone willing to show off their moves, and the other designated for a krump battle.

The other building held the main stage, where all of the performances and competitions would took place.

Despite the bleachers’ large seating, there was still not enough space to contain the thousands of spectators. Many had to stand on the sides or sit on the floor.

The event began with a youth division competition.

Fifteen different crews rocked the stage in an attempt to impress the judges and win first place.

“I feel like they’re more hyped up than the adults,” Mayo said.

After the youth competition ended, fans rushed to get in line for a meet and greet with the celebrity dancers and headliners.

“I came to see the twins (Les Twins),” Los Angeles resident Florencia Rodriguez said. “I came across a World of Dance video and saw they’d be here and was interested.”

The Les Twins are from Paris, France, who have danced with the likes of Beyoncé, Missy Elliott and Cirque du Soleil.

Once the meet and greet was over, the upper division competition began.

Adults and more experienced crews competed against one another and amazed the audience with their moves.

“(It’s) an amazing accomplishment, I’m still in shock,” she said.

Contreras’ crew practices at least nine hours a week, which increases to five hours a day when they get close to competition time.

“It’s an honor to share the stage along with such amazing individuals,” Contreras said.

The upper division competition ended when the 11 headliners dominated the showcase.

The audience screamed with glee whenever a favorite of theirs took the stage.

Les Twins’ performance ended the event with hoards of people rushing to the front for a better view.

“What I love most is how the dance community comes together and just has a moment to share the love for dance. It’s just so amazing to me,” Contreras said.

Rodriguez appreciated the atmosphere brought by World of Dance.

“I like how everyone can just dance and they don’t feel weird about it,” Rodriguez said.

The next stop on the World of Dance Tour is Shanghai, China, where more teams will compete, and China’s love of dance will be shared with fans around the world.

The last stop for this tour season will be the World Finals held at the Pasadena Convention Center on July 30.
Tickets are already on sale at worldofdance.com.