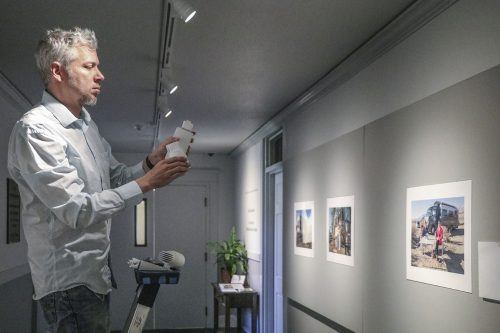 Kevin Bowman, photography department manager, installed the latest photography exhibition, “Life on Wheels: The New American Nomads” by David Gardner, in the Carlson Gallery. In this series, Gardner captures moments of the lives of Americans who have decided to live on the road in recreational vehicles instead of living in a traditional home. A reception with Gardner will be held from 5:30 p.m. to 7 p.m. Wednesday in the gallery. / photo by Nadira Fatah

The bottom floor of Miller Hall has turned into a recreational vehicle showroom with full-timers, or those who choose to live on the road, and long-time travelers inside and out of their precious mobile homes.

“Life on Wheels: The New American Nomads,” an exploration of the lives of full-timers, is on display in the Carlson Gallery through Dec. 15.

“This project chose me, I didn’t choose it,” photographer David Gardner said.

He said the premise of “Life on Wheels” only came along because he was meeting people while photographing landscape. He incorporated people into his love of land while shooting his collection “Marking our Place in The World” which led to “Into the Anthropocene,” a closer look at human impressions on the natural world. Gardner said he likes the way photographing full-timers forces him out of himself, to be social, and overcome his fear of people.

Professor of Photography Gary Colby said he chose only portraits because they show what people want while landscape photos are more about experience.

“I focused on the portraits so we’re talking about the people,” Colby said. He added that documentary content gets more important with time; everything in a portrait, like a person’s hair and clothes, is historic.

Some photos captured faces that could be described as serene.

“I don’t see them as sad, I see them in transition,” Colby said.

“Lorelei” is a woman sitting on the doorway of her turquoise Lazy Daze RV with her face in her hands, staring away from the camera, a thoughtful pose.

“The quality of the subject is best revealed in repose,” Colby said. He added that when people smile for photos, they hold unreal emotions on their faces.

Gardner said that all the subjects wanted to smile to begin with, but gave a different look by trying not to smile after Gardner told them to do so less.

“I want to photograph how they look all the time. When they smile, that goes away after a few seconds,” Gardner said.

“There is a growing contemporary movement of ‘van life,’ where young people turn vans into living spaces,” Bowman said.

They differ from full-timers since they turn regular cars into living spaces and use their travels to make a living, Bowman said. The couple in “Gone with the Wynns” embodies this trend in that they hit the road in an RV, podcasting and blogging about how young van-lifers make a living.

Not all the subjects are full-timers completely by choice. The young couple in “Steve & Marileen looking for work in Washington state,” left their baby with its grandparents while traveling the west to fulfill their goals. Older couple David and Nola planned to travel for five years, but once the mark hit, David was happy to keep going while his wife, Nola missed her kids and grandchildren and wanted to go back to a permanent home.

Gardner said his favorites are “Debbie with Rupert and Elliot” and “Beverly” because they embody the spirit of typical full timers: liberal, virtually carefree and enjoying their lives.
Debbie planned to live on the road for a year but fell in love with the life and chose to keep going. A sign hangs over her head in the photo that reads, “Indecision may or may not be my problem.”

“Showering,” a woman rinsing her bare leg and “Down the Road, Somewhere,” an RV dashboard with hands firmly planted on the steering wheel got up close and personal.

“I cheated on that one. That’s my wife,” Gardner said.

“I love the show, his work and his approach to it,” Colby said.