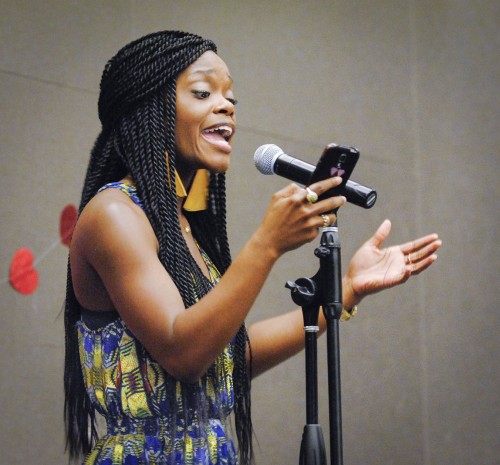 Sex education speaker Ebony Stewart talked about topics such as love, adultery and emotions. At the event, sponsored by the Campus Activities Board Monday in the Campus Center Ballroom, Stewart set an atmosphere of comedy with a hint of poetry by reciting poems of her own and joking with the crowd about everyday relationship issues and her experiences teaching elementary school students. / photo by Nadira Fatah

Slam poet Ebony Stewart was once a sex-education teacher for Texas students.

Stewart talked about her experiences with teaching elementary school students about relationships, feminism, woman empowerment, heartbreak, and sex in a spoken word performance Monday in the Campus Center Ballroom.

Campus Activities Board philanthropy chair Darian Manago organized the performance. He described her as a slam poet and a comedian who doesn’t think of herself as such, she just happens to be hilarious.

Stewart’s show included self-written spoken word and a section on pick-up lines. She also answered anonymous questions on love, sex and relationships that were submitted by the audience.

“I figured being in a college setting, more people would know some of the questions that were asked,” freshman biology major Janelle Pedroza said.

“My favorite part was the spoken word because it spoke to me,” Kheanna Mosely, sophomore sociology major, said. “I’m going through my own personal dilemmas right now.”

“Being a young woman is so hard…I’m still learning how to love myself,” Stewart said during one of her poems.

Pedroza said her favorite part of the night were the poems about student’s questions Stewart had received.

“Sex ed does have to be approached differently regarding genders, and I really liked how she approached both in a different way,” Pedroza said.

During the portion, entitled “How to Properly Flirt with Someone You’re Attracted to and Want to be your Boo,” members from the audience shouted out their pick-up lines.

Stewart came up with a few of her own gems such as “Ahh! Get back over here with my heart,” and “I’d abandon all my awful for you baby, can I call you baby? No? Ok.”

Stewart taught the audience an important lesson with a question she once received from a male student.

“If you don’t have a condom, can you use a plastic bag? No,” she said. “If there’s a girl who will allow you to put a plastic bag inside her, this is not the girl for you.”