By Dorothy Gadsby, Veronyca Norcia on September 14, 2018 in LV Life 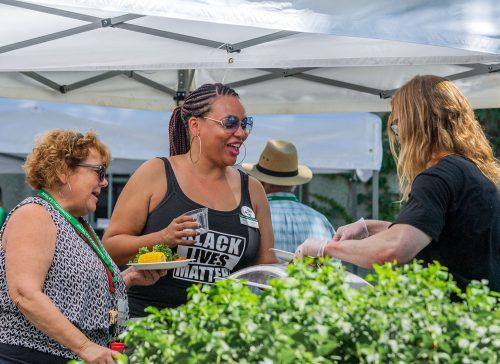 Director of the Master of Science in Child Life program Leslie Young and Assistant Director of Multicultural Affairs Misty Levingston load up their plates with the delicious food from the Welcome Black BBQ Saturday in the Fasnacht Court. / photo by Veryonica Norcia

The event was a hotspot for culture, dancing and fun.

Students would gather in the patio and dance together, creating an atmosphere that was entertaining.

Graduate student Jasmine Marchbanks-Owens, attended the barbecue to show her support for BSU.

“There are so few of us, often times we feel alone a lot, so it’s nice to be around people who look like me, being able to talk, and no one is asking me to touch my hair,” Marchbanks-Owens said.

She said it was important to host an event like this because of the small number of African American students on the La Verne campus.

According to ULV’s office of institutional research, African American people made up 6 percent of the student demographic as of fall 2017.

There was a bigger meaning behind the event, according to the students and faculty who were involved with putting on the barbecue.

Misty Levingston, assistant director of multicultural affairs, developed the idea of the barbecue.

She felt the need to host more events tailored to the African American population on campus.

When planning this event, it was envisioned as being a melting pot not only for students but also faculty, community members and alumni.

The barbecue is only one of many events that will take place this year focused on solidifying the community.

“Us getting together is a powerful visual,” Levingston said. “You see a lot of black people together and it’s in a positive light. We’re celebrating our culture, building community so the students that go here can see that this is what we offer here at La Verne.”

This year the University’s BSU plans to work harder to be a prominent group not only on campus, but also throughout other colleges.

They are working on encouraging more people to join their group, and trying to show that BSU is not just for African American students.

“This year we want to really highlight on the fact that it’s not closed off to just black students,” Parker said.

“We want to make sure that this year everyone else can see the community that we’ve been brought up on, the love that we have in our families, and really share that with everyone because everyone deserves to know and be apart,” he said.

As the academic year continues on, BSU plans to host a poetry slam night, a black excellence ball in collaboration with other local colleges and a retreat.

Dorothy Gadsby can be reached at dorothy.gadsby@laverne.edu.