By Savannah Dingman, Veronyca Norcia on November 15, 2019 in LV Life 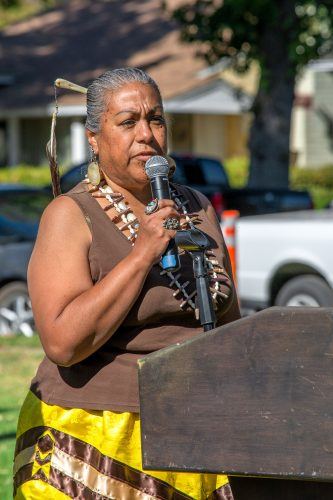 Tina Calderon, Tongva and Chumash tribe elder, spoke about the history of the Tongva tribe at the Tongva Dedication and Blessing Saturday in the Ludwick Center Lawn. The University dedicated the land it occupies to the Tongva tribe. / photo by Veronyca Norcia

The University invited members of the Tongva tribe and the surrounding indigenous community on Saturday to recognize their contributions and native land that the campus now occupies.

“What we’ve done today is really dedicated our campus land in recognition that we sit on land that was originally populated by the Tongva community,” said University Chaplain Zandra Wagoner.

Throughout the ceremony, many of the Tongva reminded those listening that respecting our planet and what it has to offer is of the utmost importance to them.

“The community we find most inclusive is nature, we want to pass that onto our children and grandchildren,” said Tina Calderon, a member of the Tongva and Chumash tribe, and resident of the San Fernando Valley.

“The earth we walk and live on is sacred. There have been groups of people who have always known it to be sacred, and continue to hold that vision and truth for all of us,” Wagoner said.

University President Devorah Lieberman opened the ceremony by acknowledging the almost complete Ludwick Center for Spirituality, Cultural Understanding, and Community Engagement, which acted as the backdrop for the dedication. Lieberman described this building as a beautiful vessel for the many important additions it will bring to the University campus to help enhance people’s understanding of cultural differences.

Lieberman also shared her appreciation of the Tongva community members.

“It is very important for the University to recognize the history of the Tongva and their culture. Their sustainability and community is inspiring,” Lieberman said.

Lieberman and University leaders invited elders from the Tongva to the front, to award them a plaque in commemoration for their contributions.

“We want to honor, with gratitude, the land itself and the people who have stewarded it throughout the generations,” Lieberman said.

“In a ceremony like this, it is in their practice that they would want to give a gift back. One doesn’t receive without also giving,” Wagoner said.

The Wolf Creek Pass Singers and Drummers performed a few songs for the audience. Two elders, one man, and a young boy surrounded a large single drum, each holding a hand-made mallet.

They also performed a special piece dedicated to veterans titled “soldier boy,” which honors sacrifices made by veterans.

More music was performed by Tina Calderon and her daughter, Jessa Calderon, a spoken word poet and activist. The two women were joined by Jessa’s son, Honor, who shook a wooden maraca along to the tune.

The songs were performed in the Tongva language, and dedicated to ancestors, mother nature, and the hummingbird, which Jessa Calderon described as the ‘medicine bird’.

“Here in California, we are taught about native history in fourth grade. But it’s all wrong. I wrote this because I was tired of them telling me the history of my people,” said Jessa Calderon, before she performed.

“You don’t define me by what you say,” said Jessa Calderon. “You pour concrete in our rivers and poison our streams.”

She ended with a song titled “Home of the Brave” which discussed a pattern of history repeating itself.

“You can’t call my folks illegal if yours came across the sea,” Calderon sang. “When Earth is all used up, you can’t just leave.”

The Office of Diversity and Inclusivity, the Cultural Center and the Office of Religious and Spiritual Life came together a year ago to engage with the local indigenous community to help plan this ceremony, Wagoner said.

“It’s a ceremony we could have done a long time ago. It’s purpose is to acknowledge the people who have been on this land for hundreds of years and bless it as Tongva land so that they are not lost in memory,” Wagoner said.

Wagoner said that indigenous people are still a present reality, rather than a distant memory.

“People are still actually Tongva, and they have descendants that go back to the earliest people that lived here,” Wagoner said.