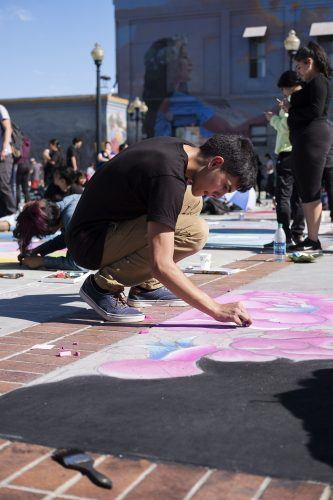 The city of Pomona held its 13th Annual Chalk Art Festival on Saturday.

Over 300 chalk art enthusiasts from surrounding communities sat on the sidewalk in Shaun Diamond Plaza to create colorful works of art.

“We started this as a community outreach for art advocacy for students,” Joshua Swodeck, commissioner for the cultural arts in Pomona, said. “But now this is open to any age. The oldest competitor was 70 years old in the professional category to two years old in the family category.”

For the high school participants, this was the first year they were able to compete in the professional category.

They are also branching out to different cities, like Pasadena, to show off their art skills, Swodeck said.

Mark Bunner, visual arts teacher at the School of Arts and Enterprise in Downtown Pomona, said the school has incorporated the event into their curriculum for the past three years.

He also added that this event was an opportunity for his students to pick a classic art genre and apply it at the Chalk Art Festival.

Each of the pieces were carefully outlined in white and the students meticulously applied a new color with each stroke of their paintbrush.

“We have been studying Japanese art,” Bunner said “From pop art, Japanese pop art to traditional Japanese art, and I hope they gain the essence of teamwork during this event.”

The School of Arts and Enterprise students had about two to three people working per piece.

School of Arts and Enterprise student Georgia Knuppenburg, 13, who has been drawing since she was seven, said she liked that she was able to have fun with the art.

“Being able to do this with my friends is fun,” Knuppenburg said.

“But it’s also really cool to do art out in public. I have been able to take everything that Mr. Bunner has taught us and transfer it to this event.”

Edward Salazar, Diamond Bar resident, brought his son and his fellow school friends to create a kindness-themed piece for the event.

“He was very excited about the event,” Salazar said. “They all met for weekly meetings to discuss what and how they were going to execute their plan.”

Nancy Alvarez, a Pomona resident who was joined by her son, said this was their first year attending.

Alvarez said she was taken aback by a realistic portrait piece of a raccoon with piercing hazel eyes that was along the sidewalk of Second Street in downtown Pomona.

“I follow the City of Pomona on Instagram,” said Alvarez, “Last year I missed it, so this year I really wanted to make it out here and a lot of the chalk art looks so life like.”