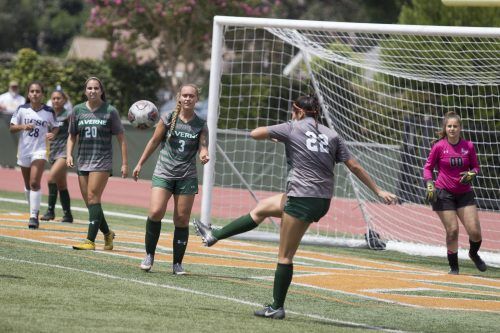 Sophomore Leopard defender Renae Loera clears the ball from the goal-box in their game against UC Santa Cruz Sunday. The Leopards would lose the game 1-0, dropping to an 0-2 overall record. The Leopards will return to action Saturday against Soka. / photo by Melody Blazauskas

The La Verne women’s soccer team fell short again at home in the final two minutes of the game against UC Santa Cruz on Sunday, dropping the game in a heartbreaking 1-0 loss.

This was the team’s second non-conference game loss after losing to San Diego Christian, 2-1, in the season opener. But the Leopards would notch a 3-2 overtime win over St. Katherine on Wednesday, improving to a 1-2 overall record.

UC Santa Cruz’s offense started the first half with a shot against La Verne senior goalkeeper Hanien Samara but was saved with a diving block.

After a toss out to mid field, ULV found themselves back on defense four minutes into the game with Samara saving another shot.

ULV’s first foul made UC Santa Cruz’s freshman forward Karina Bulli take a hard hit to the grass yet it didn’t stop the Banana Slugs from trying to take three more shots at Samara with no success.

Samara had four saves in the first half, and six total for the game.

As Ortmayer Stadium baked, ULV senior defender Alina Cobian went for back to back shots the only time ULV was in scoring position during the entire game.

“We needed to move the ball, play how we play, and play how we practiced,” says Cobian about the team getting back to what works for them.

ULV defense in the first half kept UC Santa Cruz faces in the grass but the second half determined the true strength of these new teammates.

The half started with heavy defense from ULV sophomore defender Gizzel Sulca against UC Santa Cruz’s Samantha Scarlett. ULV held momentum until Gutierrez took a wide shot that went out of bound.

With the last minutes approaching, a tie was looking more realistic for ULV and UC Santa Cruz.

With 87:42 on the clock, UC Santa Cruz’s Tea Lopes passes to Gutierrez to score over Samara’s head making the score 1-0, UC Santa Cruz.

The Leopards had little time to come back; however, their limited time together on the field has made the women’s soccer team’s goals clear.

“We are still learning to communicate and being a unit on the field,” said junior defender Katherine Obregon.

For ULV head coach Lauryn Pehanich it’s back to the tapes after the loss.

“Our energy and effort was better than last game,” Pehanich said. “Now we have a lot of good film to get started on the right improvements.”

The Leopards would go on to beat St. Katherine at home Wednesday, after scoring three unanswered goals, winning 3-2.

The Firebirds held a commanding 2-0 lead entering the last 20 minutes of regulation, but Cobian managed to find the goal after a well-placed corner kick from junior midfielder Vanessa Plascensia to cut the deficit in half, 2-1. Ten minutes later, after a Firebird handball inside the box, Plascensia rocketed in the penalty shot to tie the game, 2-2 sending them into overtime.

With the Golden-Goal rule in place, the next score would determine the game and after a highly contested period, junior forward Ivana Fatovic took a long shot that forced Firebird freshman keeper Victoria Cavazos out of the goal – allowing Sulca to tap the ball in for her first career goal, winning the game for the Leopards 3-2 in dramatic fashion.

With the win against St. Katherine, ULV improves to 1-2 on the season. Their next game will be on the road at Soka University at 1 p.m. Saturday, with their first conference game on the road at 4 p.m. Sept. 18 against Pomona-Pitzer.

Priscilla Applebee can be reached at priscilla.applebee@laverne.edu