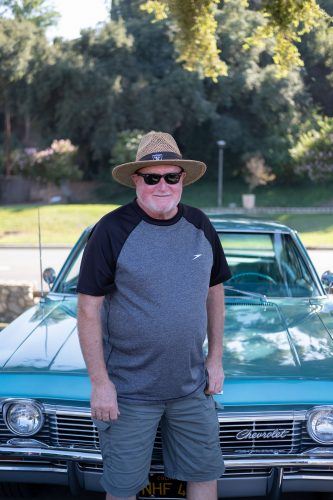 Car exhaust and engine roars filled the air as over 300 people rode their classic hot-rods into the Fairplex on Wednesday to take part in the Wally Parks National Hot Rod Association Motorsports Museum’s Twilight Cruise.

American classics of all shapes, sizes and colors were welcome, from 1973 and older. Some people come to walk around and admire the cars, while others like to show off their set of wheels and mingle with other car connoisseurs.

Every Twilight Cruise highlights a different car as its theme. This month is all about the Willys, John Duran’s favorite car, who started this event 20 years ago.

Although highly praised in the car world today, Willys were only manufactured for a short time, from the 1930s to just a few thousand produced at the end of the automaker’s run in the 1950s, said Duran.

While Duran’s love of cars remains strong, he appreciates the friendships and comradery that come along with his passion.

“I love the cars, but my favorite thing about this event is the people. I do so many car shows that at this point I’d rather just see the people,” Duran said.

People gathered around Jack O’Bannon’s 1941 Willy, shimmering in gold paint with a huge chrome engine. O’Bannon is a five time NHRA world champion team owner, board of directors of the NHRA museum and an ex-racer.

“I drive it on the street and take it to the racetrack. I turn on the headlights, honk the horn, and drive it home. It’s just fun,” O’Bannon said.

Bob Beck is the emcee for the cruise and has been an announcer at drag racing events and car shows for over 40 years.

“There’s such a variety of people from all different backgrounds, but the thing that holds everyone together is the cars,” Beck said. “There’s guys with antiques, hot rods, muscle cars, sports cars; the whole show is about cars and the people who enjoy them.”

Unlike Duran’s love for the Willys, Beck’s most loved car is anything with four wheels.

“I’ve met people here that I’ve read or heard about,” Beck said. “The who’s who of drag racing have come through here, and even some of the top cars in the show circuit.”

Some of the hot rods here have been seen in magazines and even on the big screen, making this a must-see for locals and tourists alike.

La Verne resident Harold Voelker has been coming to the Twilight Cruise since it was first introduced by the NHRA museum. He brought his 1928 charcoal gray with black trim Chevy Sedan.

“I’m here every time, I never miss a show,” Voelker said. “I love the cars and this event gives me the chance to see my friends every month.”

Voelker assures that the passion for hot rods and classic cars is still alive and well, despite some people’s doubt.

Erica Landmann, a teacher has been coming to the Twilight Cruise for five years.

“When I was three years old I decided I wanted to drive my grandpa’s 1967 Falcon,” Landmann said.

Landmann brought her souped up baby blue Ford Falcon to the show, which she nicknamed “Falc”. Her love for old school cars also carries over into the classroom, where she teaches a history of classic cars class to her middle schoolers.

The Twilight Cruise is held on the first Wednesday of every month, and both Duran and Beck look forward to November’s show and a toy drive they have planned for December.