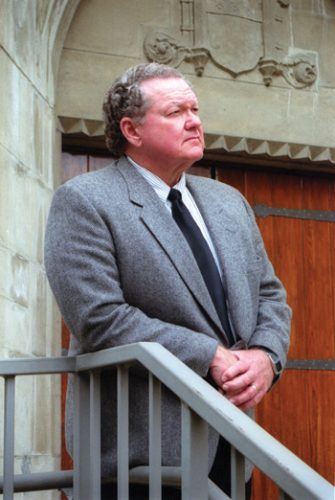 Dr. John Gingrich stands outside the La Verne Church of the Brethren in this file photo from 2003. He served the University of La Verne for 38 years as campus minister, professor of religion and dean of the College of Arts and Sciences. / file photo by Jennifer Contreras

Dr. John Gingrich, former dean of the College of Arts and Sciences and professor emeritus of religion and philosophy, died peacefully in his sleep on Dec. 7. He was 80.

Dr. Gingrich helped the University in its transition from a small sectarian college to a doctoral granting University. He was also instrumental in forming the University’s current core values and mission of on inclusivity, ethical reflection, and service, said Provost Jonathan Reed, also a professor of religion, who worked closely with Dr. Gingrich for many years.

Reed described  Dr. Gingrich as “the heart and soul of the University (who) was a larger-than-life figure, who helped transform the University.”

Dr. Gingrich was a loving father, friend, colleague, and mentor to many students, faculty, and staff. He oversaw the development of an innovative and interdisciplinary general education program that included civic and community engagement, values-based critical thinking, and intercultural awareness.

Dr. Gingrich is survived by his wife, Jacki; his two sons, John and Joel; and his grandsons, Gus and Hans.

The La Verne Church of the Brethren will hold a  memorial for Dr. Gingrich, with time and date to be announced.