By Ariel Torres, Deja Goode on September 20, 2019 in Sports, Volleyball 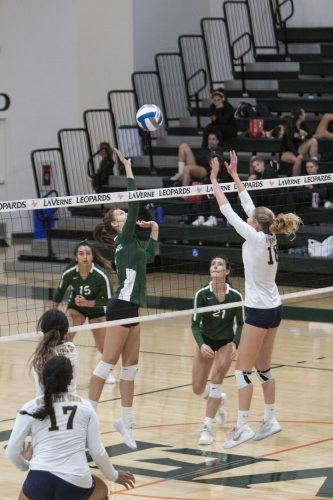 Leopard freshman middle blocker Ayana Mier defends a set from Banana Slug sophomore middle hitter Holly Teisher in La Verne’s game against UCSC at the Frantz Athletic Court. The Leopards would take the game 3-0, going undefeated in the Leopard Invitational. They will return to action at Occidental at 7 p.m. Friday. / photo by Ariel Torres

The women’s volleyball team opened the game against UC Santa Cruz with explosive energy at the Leopard Invitational and won with a final score of 3-0 on Saturday.

The Leopards dominate creating a solid seven-point lead, leaving Santa Cruz to take a timeout with the score standing at 7-0.

UC Santa Cruz’s offense was no match for La Verne’s defense and lost with the score 25-15 in the first set against the Leopards.

The second set opened with impressive plays from Santa Cruz, putting the Leopards in a tough spot.

However, freshman middle blocker Rylee Callen earned a big block, setting the tone for the Leopards.

Callen earned six kills in the game, an impressive achievement for a first-year athlete.

Throughout the second set, despite UCSC keeping it relatively close, La Verne had firm control of the momentum in the set.

In the final set, the stakes were high for the Leopards as even though they were ahead in the game, the score was neck and neck throughout the rest of the set.

Santa Cruz quickly took the lead with strong offense and dynamic energy that was absent in the beginning of the game.

The Leopards struggled with numerous defensive errors that slowly started to add up as the Banana Slugs took the lead. With the score at 17-14, the Leopards were forced to take a timeout.

Despite the close set, La Verne’s team huddle was calm. This mindset seemed to work for them as they came back in the game with a big kill from sophomore outside hitter Haley Celaya.

The Leopards were able push a few points to tie the game at 18-18, however the Banana Slugs did not make it easy for them.

Excitement filled the gym as both teams were in a position to take the set.

Santa Cruz’s Claire Okerlund, averaging 13 kills in the game, made La Verne’s defense work harder than they had for the entire game.

The junior from Fullerton consistently delivered as an outside hitter throughout the game with strong offense in the front row and the back row.

But the Leopards were determined to close out the set and game.

Despite her impressive efforts as an all-around player, it was not enough and the Leopards won in a the very close game with the final score 26-24.

With a team of 10 new players and five returners, the biggest challenge was creating a steady rhythm within the team.

The team’s dynamic was shaky in the first few games of the season, but the team knew they had so much more to offer and would not stop until they achieved their goal according to senior setter and team captain, Madison Maynes.

“It took a couple of games to find the groove, but I think after this weekend we finally clicked,” Maynes said. “It will be all uphill from here.”

Maynes also praised the freshman players for being so devoted to the success of the team. The returners have acted as mentors to the new players and made it their goal to set an example for the freshmen on the volleyball team.

“Them stepping up is a huge reason why our team has been successful,” Maynes said. “It helped make our team as a whole very close.”

La Verne also earned a win with their final game against Puget Sound at the invitational adding two wins to their record making it 6-5 overall.

The Leopards will next play Redlands at 4 p.m. Saturday at the Frantz Athletic Court.