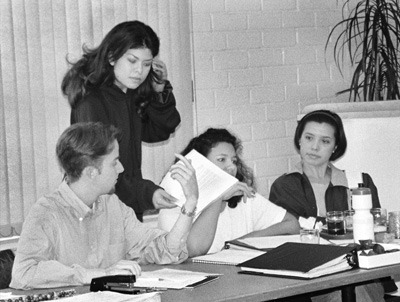 by Andrea Gardner
Editor in Chief

The Associated Students Federation (ASF) Forum convened in the West Dining Room Wednesday reflecting on the Holiday Dinner and learning more about the proposed floor for the Student Center Gym.

In response to the sudden resignations, President Dan Lougheed recalled a meeting three weeks ago, where Martinez expressed problems with the Forum, but was unaware the issues were not resolved. He said, “Elizabeth [Contreras, vice president] and I encouraged people time and time again to let us know if there is a problem.”

The Financial Review Board (FRB) convened immediately after the meeting, and were addressed by several groups around the ULV campus for funding. Prism, the literary magazine, requested $1,000 for printing expenses of its anniversary issue. It was given $550 from the FRB. ASF additionally bought a full page advertisement, costing $200. Model United Nations requested $1,500 for its upcoming conference in San Francisco. The FRB moved to fund $800, which covers the cost of registration and delegate fees.

KULV addressed the FRB, asking for approximately $6,000 toward FM transmitters, as part of their effort to change from an AM to a low powered FM station. The FRB referred the issue to the Forum.

Senior Alma Barerra, on behalf of the Senior Retreat Committee, requested just over $2,000 to cover expenses of the retreat. The FRB voted to allocate $1,000 toward the event and, because it cannot allocate more than $1,200 to each organization on campus, it voted to take the issue to the Forum to be decided there.