By Jaclyn Roco, Jennifer Contreras on September 13, 2002 in News 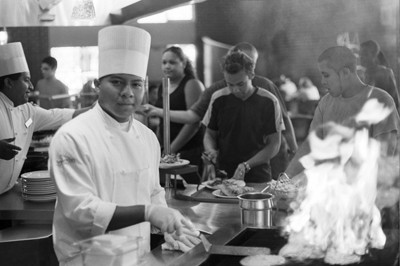 Gus Baten and his son, Bilidy, now serve the redesigned Davenport Dining Hall at the Grill. The University of La Verne’s Davenport Dining Hall, which was built in 1958, underwent interior remodeling over the summer. The dining hall is now run by Sodexho under the guidance of Aaron Neilson, general manager. / photo by Jennifer Contreras

It can be said that the new food provider at the University of La Verne, Sodexho, has done the impossible in a short period of time. Like magic, the once sterile atmosphere of last year’s Davenport has been transformed into a smorgasbord of color, smells and sounds. There are also positive changes in The Spot and the Bistro inside the campus bookstore.

It took 31 days after this summer for renovations to take place, said Aaron Neilson, general manager for Sodexho.

“We broke every record in the book when we took over the contract. It was (like) a sledgehammer hitting the wall”

A former chef for Aramark, Neilson said he had been familiar with ULV’s Davenport when he worked for the university from 1992 to 1995. After working for Aramark for eight years, Neilson said he was offered a position with Sodexho that he couldn’t refuse.

With experience at other school locations like the University of California, Irvine and the University of Nevada, Las Vegas, Neilson found himself back at ULV with two challenges already at hand: speedy redecoration and a parents’ meal to be served just one month after the take over.

Neilson said he and his staff had to deal with a tired-looking facility, faulty equipment and a ticking clock before the first meal was served. “We had only two hours before the meal started and we didn’t know where to serve,” Neilson said. “At three o’clock we all rushed into the kitchen, set up all the lines and did as much on spot equipment handling as we could.” The meal was finished after an hour and 45 minutes, he said.

Neilson gave credit to his staff, some who had already been working for ULV with Aramark, and the values instilled by Sodexho’s mission statement for getting things done quickly. “We retained everyone who wanted to work here,” Neilson said. “Our company mission statement deals with making a pleasant way of life for people doing everything we can to serve them.”

Because of the drastic changes made to Davenport’s décor, Neilson said new employees were hired to cover the additional stations. Besides offering the traditional pizza and hamburger entrees, Davenport’s new facilities, which Neilson said were created from scratch, also offer worldwide cuisine and fresh sandwiches. Neilson said he stresses on the freshness on 90 percent of everything he offers.

Student surveys were studied during the bidding process to create these new items, Neilson said. Studies also indicated that students wanted a Mexican grill in The Spot.

Despite recent student complaints with the lack of “to go” items once available at The Spot, Neilson assures that efforts will be made to offer bottled waters, grab and go sandwiches, salads and more later this month. Neilson also said although he can’t compete with Circle K, he will try to liven up the new Spot restaurants with couches and different chairs and tables as well as a smoothie bar and daily specials.

Because coffee is such a major commodity with faculty and students at ULV, Neilson said his company is offering three different kinds at all of his restaurants. While Davenport offers Maxwell House Gourmet Bean Ultimate Roast, regular Seattle’s Best is offered at the Spot restaurants. Additionally, the new Book n’ Bean Bistro located in the bookstore offers 100 percent organically grown coffee, a line called Café Fresco. Everyone will be able to use their meal cards at the Bistro for coffee, pre-packaged sandwiches and salads.

Many students, new and old alike, expressed surprise and excitement over these changes brought to ULV’s food service.

Freshman Maria Arroyo said she had seen what Davenport had looked like before the changes. “I came for the orientation and I saw the old one. It’s a lot better now. It looks nicer. The food is good too. It’s better than high school food.”

Freshmen Justin Haas and Marc Holmquist agree. Both said the food was excellent compared to the food served over the summer during Spotlight Weekend. “I actually enjoy coming to eat,” Holmquist said.

“The food is a vast improvement over last year,” said Steven Wetzel, a junior. “The pizza is great, although we need some choices other than just pizza and hamburgers sometimes. Don’t get me wrong though; I love it. The atmosphere is inviting too.”

Feedback like this will be welcomed openly after stations are set up for suggestion purposes and after a website is created, Neilson said.

“Look for me to come to your residence halls. Invite me over. I’ll bring cookies and we’ll talk about food. Keep bringing me feedback and I’ll respond.

“I’d like students to work (with us). Just fill out applications at Davenport. I’d like to have students run the show soon.

“Be patient with us,” he said. “We’re going to screw up a couple of times, but I give you my word that I’ll get it right”