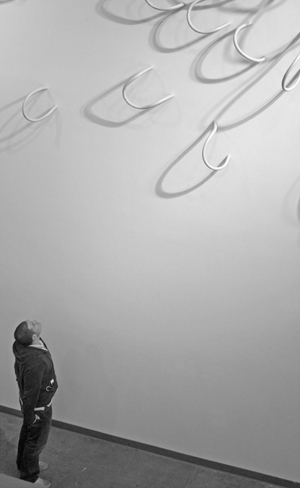 Recent ULV graduate Adam Omernik looks up at artist Julia Latané’s “Hither,” an interpretation of the string theory in physics. Scattered across the Tall Wall Space, located in the Arts and Communications building, are dozens of sculpted pipes, upholstered in blue vinyl, imitating lines moving through space. / photo by Rhiannon Mim

Flow and movement is the focus of the latest exhibit in the Tall Wall Space at the University of La Verne where artist Julia Latané had the opportunity to display her work “Hither.”

The half circles and oddly shaped semi-elliptical pieces of blue tubes emerged from the wall and disappeared into the wall again.

The tubes created different shapes and the lighting brought out shadows that merged into other shapes creating a sense of fluency.

“I’m using line the way it would be used in a drawing,” Latané said.

The work was inspired by the string theory in quantum physics, which states that everything in the world is made up of small “strings” which spin and move in different directions.

The frequency at which they move determines what will ultimately be formed.

Latané tried to mimic this same type of movement in her work, calling it “Blue Superstringms.”

“It carries its own energy and suggests movement,” Latané said.

The sculpture consists of 44 pieces of pipe that were heated and bent to acquire the desired shape.

They were then covered with blue vinyl.

The piece was expanded from a smaller sculpture especially for the Tall Wall.

“The goal is to make the piece better than just the materials,” Latané said.

The piece had a life of its own as it flowed across the wall.

“I think everyone can have some kind of response to something that is an active part of the environment,” he added.

The lighting became an essential part of the piece, bringing out different shadows that seemed to connect some of the tubes to others.

“It [light] makes it come to life,” said Jaclyn Hicks, a sophomore English major. “It is interesting how every perspective you take on it is going to be a different perspective.”

The angle at which the piece was viewed had a great effect on how it was interpreted.

When viewed from the front, the piece seemed to flow from side to side.

When the piece was viewed from the side, it almost seemed to be moving towards you.

Because of this the angle at which the piece is viewed is an essential factor to getting the full experience of the sculpture.

Latané’s work is usually focused on nature and how things grow and it is usually composed of shiny, plastic-like material.

The exhibit will be open until Jan. 17 at the Arts and Communications Building.