By Melody Blazauskas, Ryan Konrad on February 26, 2021 in LV Life 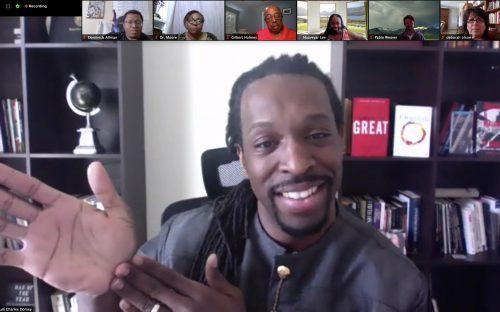 Rev. Charles Dorsey speaks about overcoming limitations and embracing your power at a Zoom lecture hosted by the Brothers Forum on Wednesday to commemorate Black History Month. / screenshot by Melody Blazauskas

Author and vocalist Rev. Charles Dorsey talked about the Black experience and challenged participants to be agents in disrupting oppression and white supremacy on Wednesday at the “We Got Problems: A Conversation about Overcoming Limitations and Embracing Your Power” lecture held via Zoom an hosted by the University of La Verne’s Brothers’ Forum.

The lecture borrowed from the first chapter of the book “The Souls of Black Folk” by  W.E.B. DuBois, one of the founders of the NAACP. Dorsey said that the problems and racism that afflict the United States today are found at four levels: the soul, conversational, awareness, and response levels. He added that these problems start at the soul level.

“What is it about our country that disturbs us at the soul level?” Dorsey said.

Dorsey added that having these conversations on race can often be the dilemma itself.

Dorsey said that people should not believe that saying sorry is enough for transformation. Instead, participating in the movement for racial justice, life risk, and showing up are better tools for transformation. He also discussed problems at the response level that come when people do not have energy to recognize and understand the systemic racism that people of color face, or just refuse to listen.

“Silence is resistance where ignorance is immediately proximate,” Dorsey said.

Daniel Loera, director of the Center for Multicultural Services, said that the lecture disrupted his own thinking and made him feel connected to those impacted by social justice.

Drake Ingram, sophomore criminology major and president of the Brothers’ Forum, said he deeply resonated with Dorsey’s lecture and emphasized that acknowledging the problems and presence of the Black community is important.

“When it came to silence basically as a sign of resistance, as a way of self preservation, that couldn’t be more true in dealing with you with law enforcement, and I’ve come across law enforcement multiple times in my life,” Ingram said. “We have to be aware at all times. And yes, as he said, there’s a time and place to be active and resistant but there’s also a time and place you know to bite your tongue.”

Ryan Konrad can be reached at ryan.konrad@laverne.edu.