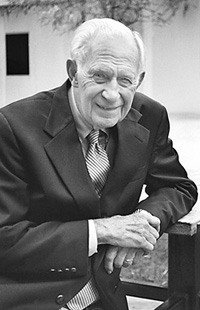 On Thanksgiving day, the University of La Verne lost a valuable and memorable member of its community, Verne Orr, former dean of the School of Business and Global Studies.

Orr, was born in Des Moines, Iowa, but called Pasadena home after moving there as a child.

Attending Pomona College and receiving a master’s degree in business administration, he then enlisted in the Navy after the attack on Pearl Harbor. During active duty in the Pacific, he earned a Purple Heart after his quarters on a supply ship was hit by a torpedo. Orr always described it as “no big deal.”

On completing his service, Orr returned to Pasadena to work for his father’s used car lot, Verne Orr Motors in Pasadena.

In 1967, Ronald Reagan, then the governor of California, appointed Orr as director of the Department of Motor Vehicles. Then, in 1970, Reagan again appointed him as the state’s Director of Finance, a position he held until Reagan left office in 1975.

To add to his resume, Orr served on the University of California Board of Regents, and then on Reagan’s 1980 presidential campaign and transition team. It was at this time Reagan appointed him Secretary of the Air Force.

In this position, Orr was responsible for restarting the B-1 bomber program, and began the inception of the B-52 stealth bomber.

Orr also had a lot of help from his first wife of 46 years, Joan, who would accompany him on tours of bases and give back reports about housing, family services and hospitals.

In one instance, in Minot, N.D., Joan discovered that the nearest hospital for pregnant women to go to was 25 miles away, a challenge during harsh winters. The obvious alleviation: “We built a hospital in Minot,” Orr said. He retired from his Air Force position in 1985.

Joan, suffering from Lou Gehrig’s disease, died in 1988. Orr later married Sarah Smith in 1989, after meeting her at a United Way fundraiser. The two opened up a planning and management consulting firm; Orr began working on his doctorate at Claremont Graduate University in the 1990s.

At age 83, he put off his studies to become the University of La Verne School of Business and Global Studies Dean, holding the position from 1999-2002.

“He could run circles around people much younger than he was,” said Stephen Morgan, president of the University of La Verne.

One of Orr’s priorities for the college was trying to unify the faculty, prevent them “from attacking each other” and finding a focus or vision, said the president.

“I think it was the combination of being a businessman and a public servant that gave him such great experience for La Verne. He was just an amazingly talented person,” Morgan said.

After retiring from ULV, Orr continued his studies, writing a 180-page dissertation on the B-1 bomber that he helped promote for the Air Force. At the age of 88, he received his doctorate degree.

“Very seldom are we able to attract someone with so much experience in different arenas,” Morgan said. “Verne was a person of remarkable talent and remarkable energy.”

“He was an inspiration to all of us who had the privilege of working with him, and we were fortunate to have his leadership in our community,” Morgan said.

A memorial service will be held at 1 p.m. on Sunday at the First United Methodist Church in Pasadena.

Alex Senyo can be reached at alex.senyo@laverne.edu.