By Antonette Manabat, Liz Lucsko on March 28, 2003 in Softball, Sports 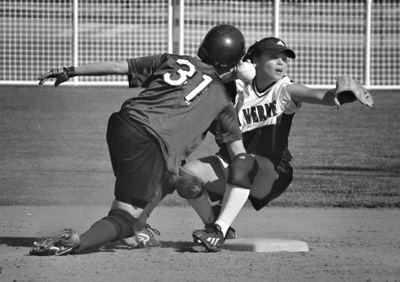 Sophomore Kourtney Tomlinson tags out junior Marcie Hagen at second base. La Verne won 8-7 and 13-5 in the doubleheader against Willamette University Tuesday. The Leopards hit six homeruns and wrapped up the second game in five innings. / photo by Liz Lucsko

The University of La Verne softball team was flawless last weekend, going 6-0, including 4-0 in the month-long Chapman Sun West Tournament. This week it raised its winning streak to eight games after beating Willamette University twice Tuesday, 8-7 and 13-5.

With momentum on their side, the Leopards went into the first of two games against Willamette, scoring five runs in the first inning. Senior Gina Meza hit a homerun with senior Libby Ramos on second base. Senior Jackie Russo followed with a homerun of her own with senior Kim Schrepfer on second. Junior Brandi Thompson then stepped up to the plate to hit the first of her two home runs; she hit her second in the third inning.

Willamette gave ULV a good fight in the first game, ending the seventh inning with three runs, but it was not enough for a win.

Whitcher, last season’s Southern California Intercollegiate Athletic Conference player of the year, has been a significant part of the team’s eight-game winning streak. Whitcher was named SCIAC Female Athlete of the Week Tuesday before the games.

“I was really surprised; I think it’s great that people from the softball team are getting recognized,” Whitcher said.

ULV is currently in second place in the Sun West Tournament, with a tournament record of 7-1.

“We call this time March Madness because we play so many games, but that’s what everyone wants. We’re pumped and we’re having fun,” said senior Augie Torres.

The Leopards faced Luther on Sunday, easily defeating it 9-1. ULV started off strong with three runs in the first inning as Whitcher hit a homerun with Ramos on second and Meza on third. Luther took one run in the first inning but was shut out by the Leopard defense the rest of the game.

ULV went up against Pacific on Sunday; the Leopards took the game 7-3. The Leopards again took control of the game from the very beginning, scoring four runs in the first inning.

In the middle of the Sun West Tournament, the team had no breaks as they played a doubleheader against Linfield on Saturday.

Chapman was shut out by the Leopards, 10-0. ULV scored four runs in the first inning of play. Ramos started it off as she singled to left field and was followed by Whitcher, who hit a homerun. ULV’s defense took control, only allowing Chapman three hits in the entire game.

The Leopards also played Tufts Friday, winning 4-2. Tufts scored their first two runs in the second inning; ULV answered in the third inning with three runs. The Leopards defense stepped up, not allowing Tufts to score again in the game and allowing only four hits.

“We’re a lot more focused now than in the beginning of the year; all these games the girls are playing are motivation enough because they look forward to playing,” Kline said.

The Leopards continue action with four games in the Sun West Tournament this weekend.