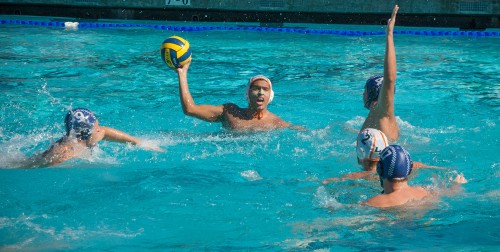 La Verne junior driver Bryan Jimenez looks for an open teammate during a rush by Pomona-Pitzer defenders during the second quarter of Saturday’s game at Haldeman Pool. The Leopards fell early in the first as the strong Sagehens defense submerged the Leopards, 19-8, resulting in the fourth conference loss of the season for La Verne. / photo by Julian Mininsohn

The men’s water polo team fell short to the Pomona-Pitzer Sagehens on their senior day, losing 19-8 Saturday at Haldeman Pool in Claremont.

The Leopards are now 2-4 in the Southern California Inter­col­legiate Athletic Conference and 18-4 overall.

The Leopards defeated Pomona-Pitzer in a close game, 10-9, in the teams’ first meeting at the Inland Empire Tournament Sept. 13.

This time around, the Sagehens were in ultimate control beginning from the first quarter.

The team fell short early in the game and were not able to come back, resulting in the loss.

“I think it was two counter attacks in the first quarter that ended up being two goal turnarounds,” head coach William Rodriguez said. “If we would have scored them it would have prevented Pomona from scoring two of their goals. They came out strong.”

The Leopards were off to a slow start, as the Sagehens went up early 5-0 in the first quarter of the game.

La Verne had a chance to score but the ball was deflected by Pomona-Pitzer sophomore goalkeeper Ethan Prater-Fahey.

This helped put La Verne on the board, but the Sagehens were still in the lead, 5-1.

“It was not our best game because we came out slower than we usually do,” junior defender Viken Huening said.

“We went down big in the first and did not recover quick enough.” he said.

Pomona-Pitzer continued to go past the Leopards defense.

The Sagehens scored two more goals to take a 7-1 lead heading into the second quarter.

To start the second, Phillips scored a goal for La Verne, but they were still down, 7-2.

As the ball went back-and-forth, the Leopards were determined to score another goal.

With 5:14 left in the second quarter, Huening passed the ball to Estevez, who found an open spot near the goal and scored another goal past sophomore Pomona-Pitzer goalkeeper Ethan Prater-Fahey.

The Leopards were still down, 7-3.

With shots made by Pomona-Pitzer’s senior attacker Stephen Vint, junior defender Phillip Clayman and sophomore defender Nic Lanker, this put the Sagehens past La Verne, 11-4, heading into the second half of the game.

“I thought we could have been way better in our game today and score could have been a little closer,” junior defender Troy Williams said. “Things like this just happen and we need to look back at it and regroup.”

Coming into the second half, the Leopards were determined to finish strong, hoping to defeat the Sagehens.

The La Verne defense quickly prevented the Sagehens from taking shots. Pomona-Pitzer stepped up and dominated the third quarter.

The Sagehens scored nine goals, while the only La Verne goal came from junior driver Bryan Jimenez with 26 seconds left, bringing the score to 19-5 Pomona-Pitzer.

The Leopards’ defense fell apart during the third quarter as shots went past each defender.

“We need to focus on being better at each game and be better in our in game decisions,” Huening said.

“When we initiate shots, we just need to follow through.” he said.

The Leopards stepped it up in the fourth quarter, limiting the Sagehens to no goals.

Freshman driver Josh Vega scored his first goal of the game with 7:20 left in the game, 19-6.

A minute later, sophomore attacker Robert Atherton passed the ball to Vega, who then scored again.

With 2:52 left in the game, Jimenez found Vega wide open and he scored once more.

Vega finished the game with three goals, along with Estevez who finished with two.

Although the Leopards fired back stronger in the fourth, it was too late, as La Verne fell short to the Sagehens.

“It really is the fundamental stuff like our defense and offense,” Huening said.

“We’ll make a good shot, won’t make it then suffer from our turnovers, ultimately falling short,” he said.

The Leopards also faced the Redlands Bulldogs Wednesday and were defeated, 13-9.

“This season we’ve had visible improvements and we have been in a drought lately,” Williams said.

“We just need to keep our heads up and prepare to look forward to finishing the season strong.” he said.

The team will face Whittier in its last home game of the regular season Saturday at the La Verne Aquatics Center.

“Whittier is a very good team, we lost to them the first time by two goals and we are looking to avenge that loss,” Rodriguez said.

“It’s going to be the last home game of the regular season for us and the last day for a couple of our seniors to showcase their talents,” he said.