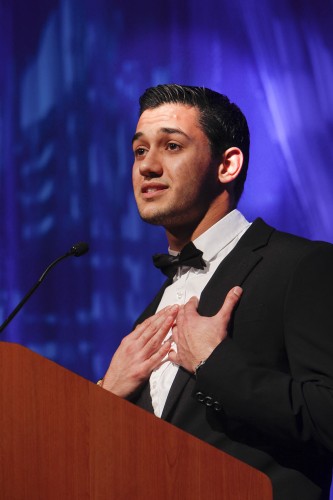 Scholarship recipient and junior biology major Kandin Maraquin talks about overcoming adversity in his life that ultimately shaped his decisions Saturday at the annual Scholarship Gala. The Webb Family was honored for their generosity to the University. / photo by Kathleen Arellano

The University of La Verne raised more than $500,000 for student scholarships at the annual Scholarship Gala Saturday at the Sheraton Fairplex Conference Center.

“The thing that I love about the University is that it is a reflection really of what our family does, which is giving as a way of being,” Kiana Webb-Severloh said.

“I realized that what this event was about had nothing to do with me or my speech, but it was about what we were creating and the possibilities we were fulfilling.”

To demonstrate how scholarships can change students’ lives, alumna Angel Kennedy and junior biology major Kandin Maraquin shared their stories of how scholarships helped them achieve their dreams of attending college.

Kennedy graduated with a bachelor’s degree in international business in 2013 and currently works for NASA Jet Propulsion Laboratory.

She spoke about the struggles she went through after her grandparents died when she was 16 and explained how thankful she is for the scholarships that allowed her to attend the University and become the first in her family to be accepted into college.

“I know I wouldn’t be able to have the courage to continue to reach if I first wasn’t given the chance to, so thank you all for sharing similar dreams and believing in others,” Kennedy said in her speech. “You’re giving students hope for a brighter future.”

Maraquin was nominated by Director of Forensics Rob Ruiz to receive the Speech Communication Performance Scholarship, which is given to incoming freshmen who demonstrate strong accomplishments in speech communication areas.

“We followed his high school career and saw his success there, so it was a tough decision, but he very much earned it,” Ruiz said. “He’s gone beyond what I would expect.”

Maraquin explained how important the scholarship was to him and his family, and how it has helped him with his success on the University’s debate team.

“(The Gala) is one of the rare times we actually get to look at the people who donate money to us and look them in the eyes and say ‘thank you,’” Maraquin said. “Without the scholarship, I might not have been as enthusiastic about competing (in debate), and so I think it has made my time at La Verne a lot richer.”

Students were not the only ones to emphasize the importance of scholarships.

“This is a really important event, not just for the University, but also for students that rely on scholarships like I did when I was an undergraduate student, so I support it fully,” University public relations manager Mark Vidal said.

“I think it’s important to show the good work the University is doing in the community, and it’s important to highlight our students.” The event was not just to raise money for student scholarships, but it was also an opportunity for the donors and Board of Trustee members to get to know the students receiving support.

They mingled and talked before the reception, sharing stories about their experiences at the University.

“It really affirms the work that we do for the University as being for the students, and that’s why we come here and we do what we do,” Board of Trustees chairman Luis Faura said.

“When we give our time, our treasure, our talent, it’s all for the students because that, at the end of the day, is the purpose driven life that we have, to help these students.” The money raised through the Scholarship Gala will be placed into the University’s scholarship fund and will be awarded to students in the future.

The University awarded its largest amount of scholarship money this year, with more than $44 million going to students’ financial aid, and hopes to award more in the years to come, Lieberman said.

“That is why we’re here tonight – to continue to provide scholarship support,” Lieberman said in her speech.