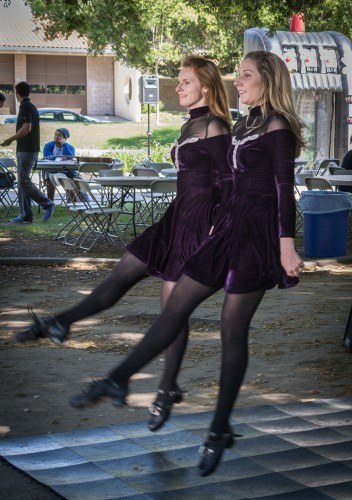 Carrol Coyne and Meredith Lyons perform an Irish folk dance as a part of the Luck of the Leos event  March 25 in Sneaky Park. Coyne and Lyons have been dancing for about 17 years. Lyons founded the Lyons Academy of Irish Dance in San Pedro in 2010. / photo by Daniel Torres

“Luck of the Leos,” a celebration of Irish culture hosted by the Campus Activities Board, drew nearly 150 students to check out live entertainment and dancing Wednesday at Sneaky Park.

“St. Patrick’s Day to me is another day that we can experience other cultures here in America with people that live along side of us,” said Jasmine March­banks, sophomore communications major and CAB philanthropy chairwoman.

“It’s a great way to bring true diversity amongst all the students and have a connection with something that we all aren’t technically or truly a part of but are still supportive of,” she said.

Each of Legacy’s songs told a unique story and the band explained the songs’ stories and provide facts about Irish culture.

“I was pretty stoked to hear that because I love Irish music,” said senior music major Mckinley Pollock.

“I have been to Ireland before and that’s kind of what developed my love for it. I’ve got to say that I don’t know too much about the Irish culture even though I went there, but the country itself is beautiful and very green.”

Along with the live music, a spread of corn beef, cabbage, mixed salad, fruit and roasted potatoes was the Irish grub catered for students during the event.

Some lively interaction between the performers and students took place when dancers from the Lyons Academy of Irish Dance collaborated with Legacy and performed during songs inviting the crowd to come and join.

“We are here for the viewing and listening pleasure,” Meredith Lyons, founder and dancer of Lyons Academy, said.

“We hope that everybody in attendance was able to hear the hard shoe dancing on the floor we brought. It has a great sound when it is done right and people are able to hear it,” she said.

The unique dancing style intrigued many students and they headed out to the dance floor for some fun.

A cash cube provided another form of entertainment—prizes.

Students could stand in the cash cube donning goggles, as confetti, shamrocks and printed money flew around.

The goal was to collect as much money as possible by stuffing it into pockets and grabbing handfuls.

CAB encouraged students to dress up and celebrate Irish heritage by wearing unique outfits or sporting the color green.

The event brought awareness to what St. Patrick’s Day and the Irish culture is all about.

“I really hope that everybody who attended today loved all of our festivities from the dancing, to the music, to the food and that they got a true sense of what the Irish culture is all about,” Marchbanks said.