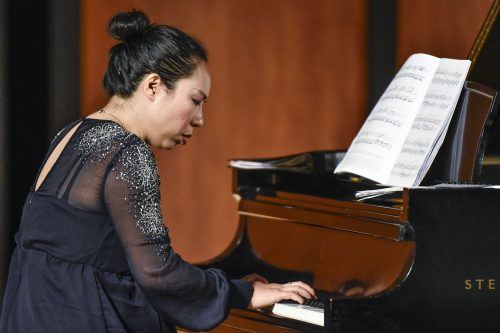 Grace Xia Zhao, assistant professor of music and artist-in-residence, chose highly personal pieces for her piano recital, “All Things You Are,” Sunday in Morgan Auditorium.

The performance was part of the music department’s Sundays at the Morgan concert series.

“I really feel this particular concert is very personal to me. The soul of the program was the Beethoven,” Zhao said of her choice to play Piano Sonata No. 21. “It is one of the most profound, most difficult piano sonatas he’s ever written.”

Zhao explained that the French call this specific Beethoven piece “Aurora,” which she translated as meaning, to her, a kind of darkness turning to light.

She said she felt that a lot of the pieces chosen have a surge of lightness and darkness within them.

Zhao also performed several other pieces, including those composed by George Gershwin and William Grant Still.

She said she was especially excited to perform a brand-new piece, “Sonata for Piano,” written in 2017 by California composer Daniel Highman.

“I was very excited to do a world premiere of a brand-new sonata,” Zhao said. “I felt I was true to myself, and I let myself be honest and real. I’m happy.”

Zhao said she felt many of the pieces she chose to play involved a lot of introspection on the performer’s part.

“They’re very emotional, so you always have to find that place; to let yourself be barren and let yourself come out and really examine what this music means to yourself,” Zhao said.

Caelin Eager, a La Verne alumna and past student of Zhao’s, was on stage along with Zhao for a few pieces – not performing, but page-turning.

“She’s an amazing person, an amazing teacher. I’ve been page-turning for her for a while,” Eager said. “Often times people have these memorized, but if they don’t… It basically just makes it easier to keep going, because you need to use both hands.”

Eager took lessons and worked under Zhao for about six years and has been page-turning for her since she was an undergraduate student.

“It’s good collaboration work,” Eager said. “We kind of just get each other because our styles are so similar.”

The audience was almost full, with only a few scattered empty seats here and there.

Members of the audience were responsive, giving heart-felt applauses after each piece and staying quiet and attentive while Zhao played.

“It was really amazing. It was so cool to watch and see how the tempos changed between each song,” Carson Cole, an audience member from Providence, Rhode Island, said. “There were some really slow ones, but then there were really energetic and lively ones.”

Reed Gratz, professor of music, had nothing but praise for Zhao and her talent.

“She is an outstanding person and teacher, as well as a brilliant pianist,” Gratz said.

Zhao said she thoroughly enjoyed her performance and felt that the audience was truly attentive to what it was that she was trying to present.

“I loved the audience. They were listening and I was communicating; to me that is the ultimate stage,” Zhao said. “It’s letting yourself be out there in hopes that someone sees you.”

Students flock to Tpump Tuesdays
A walk through the wildflowers